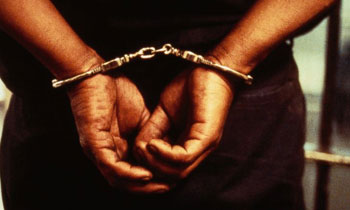 Four policemen formerly including a former Officer-In-Charge attached to the Wadduwa Police Station were remanded till March 6 after being arrested by the CID yesterday over the death of a suspect in police custody in 2012.

The four policemen were arrested following a probe over the death of a male suspect in the Wadduwa Police custody in April, 2012.

The suspect policemen including the retired officer were produced before the Panadura Magistrate yesterday afternoon over the charges pertaining to Convention against Torture and other Cruel Inhuman or Degrading Treatment or Punishment Act No.22 of 1994.

The Magistrate ordered the four suspects to be remanded till March 6. (Kurulu Koojana Kariyakarawana)