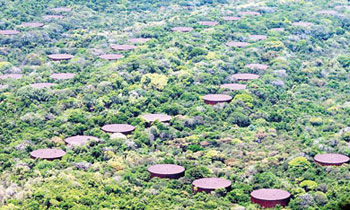 A Cabinet decision to take over 16 tanks from the Trincomalee Oil Tank farm has not been carried out as the Ceylon Petroleum Corporation (CPC) have been prevented from taking them over, the report of parliamentary committee on Public Accounts ( COPE) which was presented to Parliament said yesterday.

The report submitted by COPE Chairman Sunil Handunetti to the House said the CPC officials who visited the tank farm had been prevented from entering it by certain forces despite a prior notice given to Indian Oil Company officials. Meanwhile the report said losses from the hedging deal which was originally thought to be Rs 10 billion had now arisen to Rs 14 billion in 2016.

The Tourism Development Authority had paid Rs 7,382,305 as a part of the interest of a loan of Rs 100 million issued to a private hotel by the Bank of Ceylon in 2014, the report notes. The COPE has found that a sum of Rs 11,089,228 out of Rs 29,195,802 that had been allocated to renovate 30 rooms of a holiday bungalow belonging to the Authority had been drawn without any work done. A sum of Rs 10,196,000 had been paid to a supplier of stones without approval. A sum of Rs 3,226,950 had been paid to suppliers by authority without adhering to the regulations. Even though the kalpitiya intergrated tourism project commenced in 2008 on an estimated cost of Rs 5521 million to construct holiday resorts with 4,000 rooms and infrastructure facilities and the work was to be completed in five years, not a single room had been constructed despite an expenditure of Rs 88,797,590 as at Dec 31, 2014.

An amount of Rs 260 million given as loans by the People’s Bank to a customer had been written off in 2011, the COPE report said adding that the amount was 51 percent of loans written off by the bank during that year as non performing loans.

The Sri Lanka Ayurvedic Drugs Corporation spent Rs seven million as an initial step to introduce ten new products to the market during a ceremony by the name of Isiwara Osu launch in 2015. Out of the expenditure borne on this event, 71 per cent had been spent on publicity. Out of the ten products only one was new and other nine were old products as per the report. (Yohan Perera and Ajith Siriwardana)