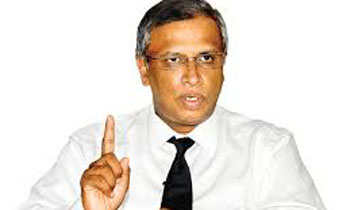 At the begining of yesterday’s proceedings, President’s Counsel M.A. Sumanthiran raising an objection on behalf of his client Sangaparapillai Pathmanapanan, an official of the Central Bank's Public Debt Department, said no official of the Attorney General’s Department, coming under Section 23 of the Commission of Inquiries Act, could lead evidence.

Mr. Pathmanapan and PTL owner Arjun Aloysius are alleged to have exchanged more than 750 phone calls and several other calls between Mr. Pathmanapan and other Directors of PTL. This was while being employed at the Central Bank Public Debt Department.

Raising the objection prior to Prime Minister Ranil Wickremesinghe taking the stand, Mr. Sumanthiran said AG’s Department officials could not lead evidence on the basis that they had acted as investigating officers.

At that point, Senior Additional Solicitor General Dappula de Livera said he objected to Counsel Sumanthiran’s appearance because of his “conflict of interest”

Mr. De Livera said Mr. Sumanthiran was a member of the 8th COPE committee and his client had been a witness at the 7th COPE proceedings which were both taken in as evidence and as such there was a conflict of interest. The objections were recorded and the Prime Minister was called to testify.

Attorney General Jayantha Jayasuriya PC then marked his appearance and said he was before the Commission under Section 23 of the Act leading the AG's Department team of officials.

At the end of the Prime Minister’s evidence Mr. Sumanthiran expanded on his initial objection and made submissions with regard to the admissibility of the evidence regarding the phone conversations which were submitted to the PCoI last week and that of the leading of evidence by AG's Department counsel.

Drawing distinction between Section 23 and Section 26 of the Act, Mr. Sumanthiran said the AG's team acted as investigating officers and thus could not lead evidence. He said he was present at the proceedings after being informed by the PCoI to do so.

The Commissioners said Mr. Sumanthiran was summoned to yesterday’s proceedings to explain to his client that none of the evidence against Pathmanapan would be used against him in the report as he was not given a chance to be heard at the PCoI.

However, they said the same would not apply to other witnesses against whom the evidence led on phone calls were incriminating, and were heard in testimony.

Mr. Sumanthiran then said Mr. Pathmanapan was interdicted on Friday following a directive from the PCoI, to which Justice Jayawardena said, “We are not running the Human Resource Department of the Central Bank”.

The Commissioners said there was no directive to interdict Pathmanapan because they had not come to any findings yet. When Mr. Sumanthiran PC kept insisting that the interdiction had occurred after the evidence connected to the phone calls, Justice Jayawardena said, “That is none of our business. You take it up with them, there is nothing we can do about it”.

Justice Jayawardena said the interdiction had occurred independent of the PCoI proceedings.

Mr. Sumanthiran PC was thereafter directed to submit written submissions with regard to the objections within a week from yesterday.

Mr. Pathmanapan had earlier filed a fundamental rights application citing the AG Department's team as respondents and alleged inhuman and degrading treatment by the investigating officers.