You are here: Home / Breaking News / Corrupt persons in the legal system panicking over my statements: Ranjan – Daily Mirror 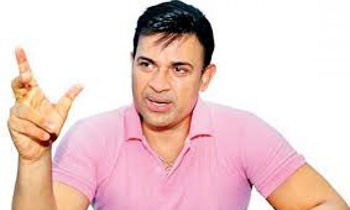 Deputy Minister Ranjan Ramanayake today said only the corrupted law enforcement officers start panicking when one talks about corruption in the judiciary.

Mr. Ramanayake told a media briefing that lawyers who have not done any wrong should not get alarmed about his recent statement that legal personnel are amongst the worst corrupted people in this country.

“Bar Association of Sri Lanka Chairman U R De Silva has threatened me by saying they will file legal action against me for contempt of court. I respect the judiciary, the judicial officers and the law. I clearly state that I have not made any statement which could be subjected to contempt of court. What has taken place is nothing but misunderstanding. I only referred to what Upul Jayasuriya, J C Weliamuna and Chandrika Bandaranaike Kumaratunga, Prime Minister Ranil Wickremesinghe and what President Sirisena had said before. Late Prime Minister John Kotelawala said he would apply tar on the heads of corrupted monks. He said all monks should not panic about this statement. Likewise only corrupted judges and lawyers should panic about my statement. There are judges whom we could worship including the Jaffna High Court Judge. We can do the same to late Sarath Ambeypitiya,” he said.

“We saw how those who held the Chief Justice post in the past behaved. Buddha preached that when a king gets corrupted his ministers suffer the same fate so will the others including the citizens of the country. Chief Justice is the king of judges. Judges will have to obey the Chief Justice. A former Chief Justice has assured the head of state that he will deliver any judgement according to whims and fancies of the latter if his term is extended. This is a perfect example of corruption. Former Chief Justice and his wife were hovering around the President and Prime minister at the airport during the day the Pope visited Sri Lanka. They did it so that he could remain as the Chief Justice, I saw this with my own eyes,” he added.

Mr. Ramanayake said he believes that these cases filed against him will do some good to him. This he said because he represents the people. “My statements are based on what people come and tell me about lawyers”.

Mr. Ramanayake called for an institution where people could go when they are subjected to harassment from the judicial officers and lawyers. He said lawyers should not defend anyone who is charged with gang rape and this practice should be enforced in Sri Lanka as well. (Yohan Perera)