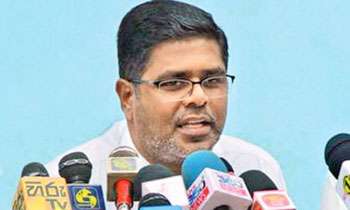 United National Party (UNP) MP Mujibur Rahman said today the Cabinet memorandum seeking compensation for war victims was not only for ex-LTTE combatants but also for those who were effected by the violence in the 1980s.

He told a news conference that the Cabinet proposal was prepared keeping in mind the recommendations of the Lessons Learnt and Reconciliation Commission (LLRC).

“The LLRC proposed that justice be meted out to those who were affected by the war. Resettlement and Rehabilitation Minister D.M. Swaminathan submitted the Cabinet memo after considering the LLRC recommendations. Several persons including those of the joint opposition are attempting to create a public opinion that the government is all out to appease the LTTE. It is not the essence of this proposal. We have to focus on the human perspective and not so much on the political viewpoint,” the MP said.

Hence, don’t be deceived by false rumours. Compensation will be paid to the family members of those who died in war and those who sacrificed their lives during the 1988/89 period as well,” the MP added.  (Sheain Fernandopulle)