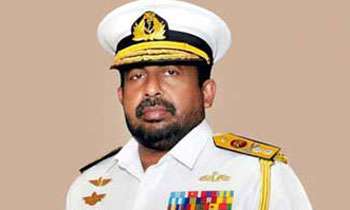 Organised Crimes Investigation Unit OIC Nishantha Silva of the CID had told court that there was evidence to prove the allegation and accordingly would take action against Admiral Wijeygunaratne, for assisting suspect Hettiarachchi to escape from the investigation, conducted into the abduction of 11 men in 2009.

Mr Silva said the two National Identity Cards recovered from suspect Hettiarachchi belonged to two other persons and those persons were unaware of a duplicate identity card of theirs that had been used by the suspect.

Mr Silva told court that the CID had sought details about Rs 500,000 that was alleged to have obtained from a bank by the suspect and the bank had still not provided the CID with details of the transaction.

OIC Silva also said that investigations were carried out to find out how the suspect had obtained the job at Dompe as a security guard and any other illegal involvements of the suspect
The Magistrate also ordered the CID to get details from 22 financial institutions and from the Colombo Stock Exchange whether the suspect had committed fraud.

It was also revealed that Counsel Ajith Prasanna, who appeared on behalf of the suspect on the previous inquiry, appeared for the suspect without the suspect’s instructions.

The Magistrate said that she would take appropriate action if the allegation was revealed.
The case will be taken up on Saturday, September 1. (T. Farook Thajudeen)