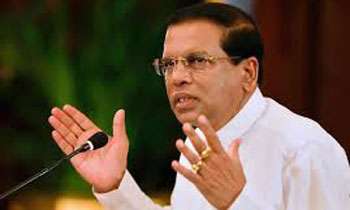 President Maithripala Sirisena, who met a group of Sri Lankans in London, said political clashes were not only in Sri Lanka and even British Premier Theresa May had to cancel the meeting with CHOGM leaders to be held at Tuesday noon, owing to the situation in British Parliament.

“Some people in our country think political clashes are only in Sri Lanka. British PM Theresa May cancelled the meeting which was scheduled to be held on Tuesday with Heads of Governments because of the situation in Parliament,” he said.

He said when he paid a visit to Japan recently with Minister Nimal Siripala de Silva, they witnessed about 2,000 people protesting outside Japanese Prime Minister’s office demanding his resignation.

“For a moment I thought whether that was a group of people from Sri Lanka had arrived in Japan. When we came out from the Prime Minister’s office after having discussions with the Premier, the number of protesters had increased to 5,000. Today, these kinds of political and economic clashes are common in most countries,” he said.

President Sirisena reiterated that Sri Lanka has achieved victories in completing development projects to ensure the sustainability of the country.

He said there was no shortcoming in the development projects which are being carried out rapidly.

Meanwhile, he said international relations of Sri Lanka had strengthened in the recent past.

“I’m not saying this because I’m the President. We can win the hearts of everyone maintaining a balanced and a non-aligned foreign policy. Our Government has fortified international relations. Everyone helps us and treat us well now. We should look at the country positively,” he said. (Sunil Jayasiri in London)