You are here: Home / Breaking News / Chinese workers in BIA project nabbed with Rs. 6m worth of fags – Daily Mirror 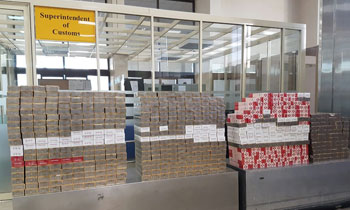 Four Chinese workers attached to the runway renovation project at the Bandaranaike International Airport were nabbed by Customs while attempting to smuggle some Rs.6 million worth of foreign cigarettes into the country.

They were checked when attempting to use the ‘green channel’.

Customs Deputy Director Parakrama Basnayake said the Chinese were searched on suspicion and the cigarettes found in their baggage.

He said they had 600 cartons of two Chinese brands of cigarettes with each carton valued at Rs.10,000.

The suspects worked for a private construction firm handling the renovation of the runway.

This has been the second biggest detection of smuggled cigarettes at the BIA this year since the arrest of a Chinese woman on February 12 when she attempted to smuggle into the country 300 cartons of Chinese cigarettes worth Rs.3 million.

Mr. Basnayake said the 300 cartons of cigarettes was said to have been for the use of Chinese labourers engaged in various construction projects in Colombo.

“There is a high demand for Chinese cigarettes among Chinese workers, but we cannot allow them to bring in foreign cigarettes, because the import of tobacco products is banned,” he said.

One of the suspects who admitted to having brought the contraband was fined Rs.100,000.

Customs Superintendents Jagath Pushpakumara and Ananda Rathnakumara made the detection on the instructions of Mr. Basnayake.

The contraband was confiscated and the Chinese workers released. (Kurulu Koojana Kariyakarawana)