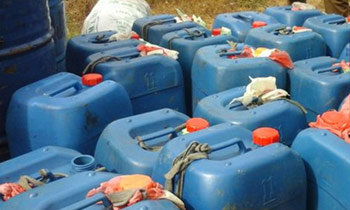 A Chinese national was taken into custody by the Bambalapitiya Police today when he was found brewing illicit liquor (Kasippu) in a room on the third floor of an apartment in Bambalapitiya.

At the time of the arrest, the suspect was in possession of 650 litres of Goda, 160 litres of illicit liquor, 168 sticks of foreign cigarettes and other equipment used to brew arrack, police said.

Investigations revealed that the suspect had been living in Puttalam for two years, and had shifted to Bambalapitiya about an year ago.

Police said the suspect had distributed liquor (in cans) to hotels and construction sites islandwide for the consumption of Chinese nationals working in Sri Lanka. (Ajith Siriwardana)