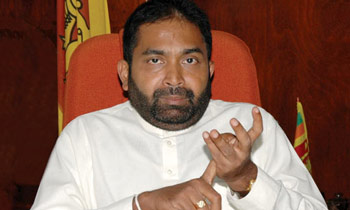 The Power and Renewable Energy Minister Ranjith Siyambalapitiya today said that Ceylon Electricity Board (CEB) had introduced a new payment system for consumers to pay their electricity bill according to their daily usage but will not affect the ongoing bill.

Addressing the media today at the Power and Renewable Energy Ministry, Minister Siyambalapitiya said the consumers can join only if they like.

The CEB and the Lanka Electricity Company (Pvt) Ltd., (LECO) had given an opportunity to its customers to identify a time pattern in which can be shift according to the ‘Time of the day terrify’.

Accordingly, the proposal was made by the CEB and it had been approved by the Public Utilities Commission of Sri Lanka (PUCSL) to implement the system.

The time period of the consumers to use electricity can be used for their activities as follows.

“The intension of introduction of the tariff system is not to increase the current rates for electricity customers. This new system will provide a single phase electricity customers to minimize their power consumption during the highest peak at 6.30 am to 10.30 am,” the Minster said.

The consumers can adapt to this new system only if they wanted to. For that they had to request a special electricity meter unit as similar to the smart metering system. Once they obtained the new system the consumer will get the benefit. (Chaturanga Pradeep)