You are here: Home / Breaking News / CB Bond Scam — I took action no sooner it surfaced in 2015: PM – Daily Mirror 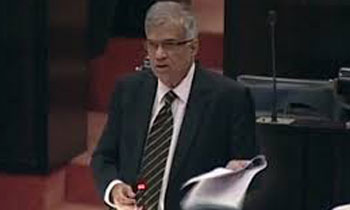 Prime Minister Ranil Wickremesinghe informed Parliament today that he had taken action on the Central Bank bond issue soon after it surfaced in March 2015.

He said he appointed a three-member committee headed by lawyer Gamini Pitipana to look into this matter, and it recommended further action and pointed out that he tabled a copy of that report to Parliament on May 19, 2015.

“Later, the COPE headed by JVP MP Sunil Handunnetti inquired into this matter further and submitted its report. I referred both this reports and the Auditor General’s report to the Attorney General. I also sought legal advice to determine whether there has been fraud, a deviation of the proper procedure and whether Central Bank Governor Arjun Mahendran was responsible for what happened. I informed the Secretary General of Parliament to send all the documents, required by the Attorney General, with the Speaker’s permission,” the Prime Minister said.

He said he also wrote to the World Bank and the International Monetary Fund (IMF) asking for details about any internationally accepted mechanism on the procedure of bond issues and determination of losses in case of a fraud.

“They ruled out the existence of such a mechanism and they notified me that the loss would depend on the market conditions at the time of the concerned bond issue,” the Premier said said.

Confirming that the government has been taking steps since 2015 with regard to the bond issue, he said even stock market trading by Perpetual Treasuries Limited had been suspended .

“The suspension has been extended for six more months. The Central Bank has frozen Rs.12 billion belonging to this company. According the Presidential Commission’s report, the loss had been estimated at Rs.12 billion. What is now left is the institution of legal action to recover the financial loss caused to the government,” the Premier said and added that it was the first time that such an impartial investigation had been conducted in an effective manner.

The Premier said the Commission had recommended a probe into irregularities in bond transactions between 2008 and 2014 as well.

“It means more than 90 per cent of transactions had taken place in that manner. No approval had been obtained from the Monetary Board for these transactions,” the Premier said. (Kelum Bandara and Yohan Perera)