You are here: Home / Breaking News / Cabinet reshuffle is a must: Amaraweera – Daily Mirror 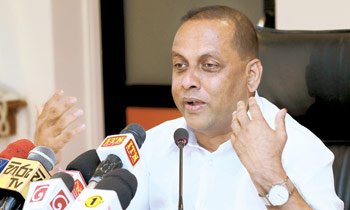 UPFA General Secretary and Minister, Mahinda Amaraweera yesterday stressed the need for a cabinet reshuffle and said if this did not happen, his party would reconsider being in the government.

“A Cabinet reshuffle is a must. It will be done by President Maithripala Sirisena in consultation with Prime Minister Ranil Wickremesinghe. The SLFP is keen to have it carried out as early as possible because all SLFP members, party supporters and the public are expecting it,” he said .

“There is no such agreement between the SLFP and the UNP. President Sirisena has the constitutional authority to appoint any SLFP or UNP member to any of the portfolios after consulting the Prime Minister,” he said adding that the President and the Prime Minister had agreed to a reshuffle and the SLFP was insisting that it be carried out as early as possible. (Sandun A. Jayasekera)