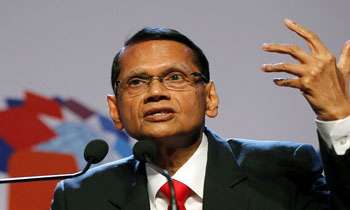 He told a news conference that several prominent ministries like Social Welfare, Social Empowerment, Labour and Trade Union Relations, which were under the SLFP, had now been grabbed by the UNP to centralize the powers of the government.

“It is evident that the government is run by UNP policies. What is pathetic is that even the SLFPers follow these policies without considering the fact that they are harmful to the country. At a time when Sri Lanka is battered by political and economic catastrophes because of UNP governance, the SLFP should announce its stance to continue with the government,” Prof. Peiris said.

“The government is not concerned about extraditing Arjuna Mahendran, the mastermind behind the Central Bank Bond scam, to Sri Lanka. Mr. Mahendran is not hiding himself but being hidden by the government. If the government is unable to arrest a single person, then we cannot expect any good from the government,” Prof. Peiris added. (Sheain Fernandopulle)