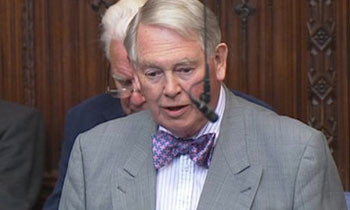 Lord Naseby of UK Parliament recently revealed how he accessed confidential reports compiled by the London’s Defence Attache in Sri Lanka during the war and gathered that the number of people who were killed during the last phase of war was 7,000.

Lord Naseby has told WION’s Mandy Clark how he went about the onerous task of accessing confidential reports compiled by none other than London’s own Defence Attache in Sri Lanka during the last phase of war in 2009 and came up with startling discoveries.

“I’ve tracked the war carefully because I just couldn’t believe these official figures – they didn’t stack up to the information I was getting. So I then invoked our freedom of information inquiry. I asked for the dispatches sent by our Defence Attache to our foreign office during the last days of the war. The application was refused twice by our foreign office. I then applied directly to the information commissioner – which is my right – and got 26 pages of redacted dispatches. Missing were the last six weeks of them. So I appealed again. And lo and behold, another 12 arrived. I went through them very carefully,” he said.

He said there was more than enough evidence to say that no one in the Sri Lankan government had said anything about killing any civilians at all.

“That was not the objective of the exercise. And from our Defence attache’s dispatches, I thus gleaned that about 7,000 were probably killed. And even (the Attache) says that about a quarter of those killed were possibly Tamil Tigers (LTTE) because they’d thrown away their uniforms,” he said.

Without being limited to classified documents, Lord Naseby had asked university experts who are “traditionally left-wing” about the casualties.

“They also said that 7,000 casualties was their estimate. There was other evidence too, like what US ambassador to Sri Lanka, Robert Blake, had named a tentative casualty figure: about 5000, a few days before the end of the war,” he said.

Lord Naseby says that he keeps telling the Metropolitan Police of London that it is wrong to allow LTTE demonstrations as the organisation had been proscribed by most countries including the UK.

The police had claimed that the demonstrators cleverly change tiny details on the flag each year in order to escape the ban on the original design.

He says he is all for an investigation into some controversial deaths during the last phase of war, such as the killing of three top Tigers despite their attempt to surrender carrying a white flag.

“Of course, those really guilty of war crimes must be investigated. But to decry the entire leadership of Sri Lanka as war criminals – it’s not done,” Lord Naseby told WION.