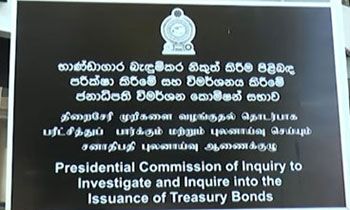 Justice Priyantha Jayawardane recused himself from hearing the fundamental rights petition filed by a Central Bank official against the officers of the Attorney General’s Department on the basis that two respondents were his close friends.

M.A. Sumanthiran PC with Niran Anketell, Junita Arulanantham and Joshua Crossette Thambiah appearing for the petitioner cited Justice A.R.M. Amarasinghe on judicial conduct, ethics and responsibilities and said there should never be an instance where there is no judge to hear a case.

Mr. Sumanthiran, Senior Additional Solicitor General Farzana Jameel with Deputy Solicitor General Nerin Pulle informed Court they had no objection in nominating any judges except two respondent commissioners in the Bond Commission to hear the case.

A CB official filing a RR petition has sought the SC to prevent him from being questioned by the AG's Department officers assisting the bond commission until the final determination of his petition.

Petitioner complains against the some officials of the Attorney General’s Department that They had humiliated him in a degrading manner in the course of Presidential Commission Inquiry into the Treasury Bond matter.

Petitioner complains of the alleged treatment he suffered at the hands of the Senior Additional Solicitors General and Deputy Solicitor General acting with other respondents the threats, intimidation, duress, harassment, humiliating treatment and unlawful invasion of privacy amounts to cruel, inhuman and degrading treatment.