Government parliamentarians and their peers in the joint opposition seem to agree at least on one thing; their opposition to the Attorney General’s Department for revealing secret telephone conversations among government members of the Committee on Public Enterprise (COPE) and Perpetual Treasuries Ltd. owner Arjun Aloysius. Since it is not about one missed call or two, but regular telephone conversations spanning over the period of COPE investigations into the Central Bank’s dodgy bond deal involving Perpetual Treasuries, this is a clear-cut case of conflict of interest and is possibly an effort to obstruct and manipulate the dealings of the parliamentary watchdog on public enterprises.

According to details revealed by the Attorney General’s Department last week, Mr Aloysius had spoken a total of 227 times to Minister Sujeewa Senasinghe, 18 times to Minister Dayasiri Jayasekara, 176 times to MP Harshana Rajakaruna and 73 time to MP Hector Appuhamy from January 2015.

Had some COPE members acted in good faith, those like MP Rajakaruna ought to have recused himself from COPE

In any other civilized country, revelations of this magnitude would have seen resignations of the accused MPs from the COPE and from Parliament. Instead, the government MPs are now accusing the Attorney General of violating their Parliamentary Privileges.

UNP MP Ashu Marasinghe was quoted as saying: “As a country which hails democracy, we are of the view that telephone conversations of MPs should not be tapped or publicized in such a manner as it is a breach of their privileges. The Speaker has also agreed to look into the breach of privileges.”

Parliamentary privileges are part of law and not something that places parliamentarians above the law. Parliamentary privileges are meant to provide legal immunity from civil or criminal liability arising from statements made or actions taken, often within the grounds of Parliament, when carrying out their legislative duties. Whereas clandestine phone calls with Mr Aloysius, while his company was under investigation by COPE imply a greater deal of conflict of interest.

In fact, the Code of Conduct of Parliamentarians in Sri Lanka which was passed last year by the current government also states: 7 (f) “The Members shall declare any private interest or conflict of interests if any relating to their public duties and take necessary steps to resolve any conflict arising thereby in a way that the public interest is protected.” 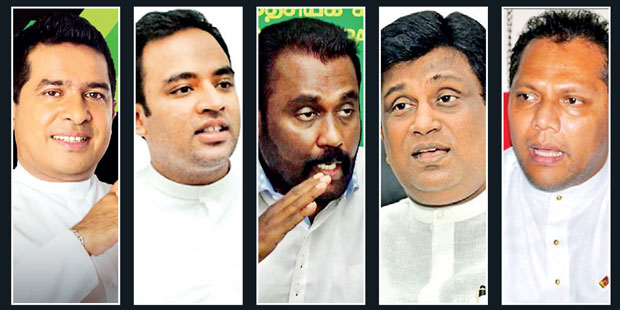 Had some COPE members acted in good faith, those like MP Rajakaruna ought to have recused himself from COPE in the first place, since he claims Mr Aloysius was his childhood friend, and many others could have revealed their phone conversations before Attorney General exposed them at the Bond Commission.

In a more nuanced take on things, this is not something where naïve MPs being duped to receive and make phone calls with an individual who is under investigation.

The scandalous revelations should even be a good enough case for the President or the Speaker of Parliament to order an investigation to ascertain whether there had been a collusion between some members of the COPE and PTL — though such a measure would definitely cause further estrangement between the two main constituent partners of the Yahapalana government.
Rather than holding the faulty MPs responsible, some quarters of the government are trying to delegitimize the Attorney General’s Department. They have crooked bedfellows: Ex-president Mahinda Rajapaksa, who last week faulted the AG Department and claimed Sri Lanka has become a police state. That is rich coming from Mr. Rajapaksa who turned the Sri Lankan Police Service into a Medamulana Police and Sri Lanka’s judiciary to a Medamulana court. Mr Rajapaksa has reasons to worry about an assertive judiciary, because, that would mean an end to covert official protection against criminal liability of his past deeds.

The biggest danger to the independence of the judiciary in this country has, throughout the history,been politicians themselves

The Presidential Commission of Inquiry (PCoI) into the CB bond issue is a watermark of enhanced capabilities and the independence of Sri Lankan judiciary — though one would feel that a greater deal of freedom of action of the PCoI emanates from the President’s blessings. The competitive relationship between the SLFP and the UNP partners in the government also makes it hard to suppress the activities of the commission. Whatever its current limitations, the success of PCoI would set a precedent for the future and truly empower the judiciary.

The biggest danger to the independence of the judiciary in this country has, throughout the history,been politicians themselves.

If leaders can destroy institutions, they can also help empower them. The first step is to let independent institutions to exercise their constitutionally mandated independence. Second, they ought to be defended from retrograde influence and intimidation by the gutter. That could be from goons mobilized in exchange for a ‘buth packet’ and a bottle of booze.