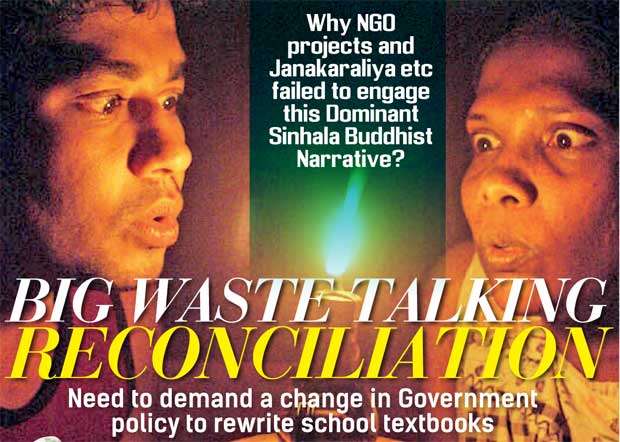 It was an interesting experience to sit in the audience at the Western Province National Institute for Drama & Art, watching two playlets on Reconciliation performed by school children on Friday 24 August (2018) afternoon.
It was a funded project named You(th) Create undertaken by the Colombo Centred NGO, the Chrysalis Sri Lanka supported by other State and non-State agencies and organisations like ONUR and Janakaraliya mobile theatre group.

They had some undefined ‘suspicion’ that couldn’t be explained. With Janakaraliya mobile theatre group creating an atmosphere and logistical arrangements that made them live and work together, barriers started coming down.It was the inability to speak the language of the other that kept them with minimum communication.
Yet, with time, they became best of friends as one Sinhala child told the audience. They wished they could continue with their new found associations. Teachers agreed to say they wish they could visit others in those families, visit them in their villages, making it a larger community of Sinhala and Tamil people.
The discussion helped spark some hope for the future. It seemed like the end of the dark tunnel. But, have we not travelled this path many times before, without any positive results?
Sixteen years ago in February 2002 when the Cease Fire Agreement (CFA) was signed, the first two years at least gave us as much hope or more in creating a society of peaceful co-existence.

Whole Sinhala villages travelled as busloads to Jaffna to worship Nagadeepa. Busloads went to Trincomalee and enjoyed bathing in the ‘hot springs’. They met Tamil people and made friends too. There were also Tamil youths in Vanni who never dreamt of coming to Colombo or Kandy but did come and left with new acquaintances and new experience.
On the funded and organised side, Colombo based NGOs had projects that took children and teachers to Jaffna on exchange programmes to experience and learn cultural diversity.
Youth from Vanni were brought down South for similar exchanges.
In a workshop for provincial Sinhala journalists held in Colombo early 2003, I was told that a Sinhala youth in Galle had received letters from a Tamil girl in the Vanni, after an exchange programme.

Her letters written in Tamil made this Sinhala youth seek help from his Muslim friend in the neighbourhood. We wondered how the girl had replies in Sinhala read for her. Perhaps the youth from Galle had his Muslim friend write replies in Tamil.
That workshop discussed everything from Conflict Management and Federalism to ‘the history of the National Question.
Such workshops for numerous social groups, journalists, L.G. and Provincial council members and for district-level public officers would have burnt out many millions of US dollars during the 25 plus years of the armed conflict.
But with all those efforts, ethnic polarisation could not even be managed. The media, in general, could not be sanitized to play an independent, socially responsible role.

The war escalated and continued to be fought to a brutal end in May 2009. Thereafter anti-Muslim campaigns and conflicts erupted violently.
As Parakrama Niriella told the audience, continuous degradation of the Sri Lankan society was everyone’s experience.
Ethno-religious polarisation, the 1958 attack on Tamil people, the 1968 January protests led by the SLFP with LSSP and CP against the Special Provision bill for Reasonable use of Tamil resulting in the death of novice Buddhist monk Dambarawe Rathanasara, setting fire to the famous Jaffna library prior to DDC elections in June 1981 and Black July of 1983 backed by UNP hooliganism were all disturbing and devastating experiences.
They left democratic mainstream Tamil politics helpless and frustrated and gave way for armed Tamil politics that brutalised society on either side of the barricades.
Yet again, the conclusion of the war has left us discussing transitional justice, reconciliation and co-existence for over nine years, still counting.
Looking back, my school life and my neighbourhood gave me more diversity than what Niriella had in his primary school in Divulapitiya.
In Dehiwala we lived in a neighbourhood that had not only Christian and Hindu Tamils, but two or three Tamil Buddhist families too. There were Sinhala Buddhists and Catholics and many Burgher families, whose first language was English.

In school too, we had all that diversity and few Bohra kids too. We cut school together to go for matinee film shows. Ate buns and had tea together. Played after school, bathed in the Bambalapitiya sea and fought each other still living as one single bunch of children.
As Niriella pointed out, we had no notion, we were different from each other. Our parents, our teachers and our neighbourhood did not make us feel different.We had no gaps to bridge in understanding the other to make friends, as two of the leading Janakaraliya artistes Sumudu and Jonathan explained with their experiences.Almost 15 years ago when Sumudu and others joined Janakaraliya they had difficulty, a reluctance in breaking fences to understand Tamil youth like Loha, and Tamil youth had an undefined suspicion in getting to know Sumudu and others.
We never had those issues. The differences in language, religion and culture were diversity we enjoyed. Tamil friends picked up Sinhala quite fast. Burger children went about with their limping Sinhala.

So did we, in Tamil and English. We too joined them at St. Mary’s church for midnight mass on the Christmas day.We sat with bamboo strips, coloured paper and gum to make the largest and the longest snake kite in the area that was our common property. So was it, when Vesak approached.
It was always a team effort that had Vesak lanterns up and proud in front of our house. We walked all the way to Bambalapitiya to watch the Vel-chariot leave the Hindu Kovil with a long and colourful procession of Hindu devotees.
Walking back, we pooled bus fares saved, bought one long sugar cane and shared it equally. Our surroundings, our experience was to that extent diverse, rich, benefitting and fun too.
Meanwhile, there were other things around us taking a different shape we were not aware of.
Greenlands College where I was admitted to the Lower Kindergarten suddenly became Isipathana Maha Vidyalaya in 1957. Greenlands Road turned Isipathana Mawatha.

“They have an immense ability to continually work towards sustaining the Dominant Sinhala Buddhist Narrative, Community work ignoring them, cannot refashion that dominant social psyche, all of them together keep fattening.”

Havelock Park where we played, fought and then made friends again, turned into Henry Pedris Park. But Dickman’s Road along Milagiriya St. Paul’s Church, never became St. Paul’s Road. Nor did Fife Road become E.R.S.R Kumaraswamy Road, in the name of the last Commissioner of Assize who resided there.
All such Sinhala Buddhist deviations and deformities our parents and neighbours had much to criticise, went without our notice and concern.
That breakaway from morals and ethics, from values and decency, turned diversity into divisions in society.
That degradation left later generations, that of Sumudu and Loha, Arosha and Leela to learn anew about the other, to accept the other as equal.
They learnt it the hard way over time, creating an inclusive subculture with new morals, ethics and values they nurture and live with, within Janakaraliya and not found outside it.

The irony is, 15 years later, they had to go about teaching that same lesson to 42 children from the next generation. That for me says, while NGOs carried our awareness work over decades, while Janakaraliya created a new process of dialogue travelling to all distant places with their Sinhala and Tamil mobile ensemble, using theatre in its applied form, winning a large applauding audience for their efforts, they have not been able to take their inclusive subculture into mainstream Sinhala society.
To quote Ven. Dr Galkande Dhammananda Thera, who was the guest speaker at this event, the majority in this society do not know there are other human beings amongst them.

‘Others’ who have to be accepted with their differences. This continues unabated as Niriella very aptly surmised, with education, media and political leaderships patronising and developing the Dominant Sinhala Buddhist Narrative.
Heavily funded NGO projects during the past three decades and Janakaraliya, with their travelling ensemble, have failed to engage with this Dominant Sinhala Buddhist Narrative.
They thus leave these 42 children to get back to the same degrading society. In school, they would be taught the same lesson about Dutugemunu that Niriella said they were taught in class by their Somawathie teacher.
So will it be for those teachers who would have to get back to their old classrooms to teach the same old textbooks and live that same life in this demeaning society?
This brings up a major question on education, media and Southern politics that decides policy.

Can social psyche be defined and fashioned ignoring their grip on society?
Together, they have an immense ability to continually work towards sustaining the Dominant Sinhala Buddhist Narrative, Community work ignoring them, cannot refashion that dominant social psyche, all of them together keep fattening.
It is thus about a change of approach in lobbying and demanding a change in government policy to rewrite school textbooks.
About demanding media to be socially responsible. Changes that can provide space for reconciliation to have its meaning proper.