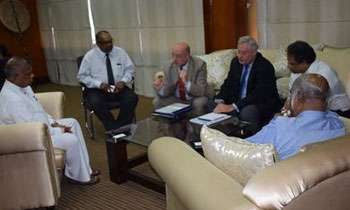 The Austrian government agreed to extended its support to the Sri Lanka Police to develop a systematic public security programme in modern technology, Public Administration and Law and Order Ministry said.

During a meeting between Austrian Deputy Consul in New Delhi Christophe Maienberg and Minister Ranjith Madduma Bandara at the Public Administration and Law and Order Ministry, it was revealed that the programme is being implemented as a concessionary loan scheme and the Austrian government expected to provide the loan in several stages.

In the first phase, the Austrian government agreed to provide a sum of Euro 10 million which has been proposed to install CCTV cameras in the entire Western Province.

In the second stage, another 10 million Euros will be provided for the development of the 119 emergency call service.

In addition,the Austrian Deputy Consul informed Minister Madduma Bandara that the Austrian government in collaboration with the Spanish government will also grant a soft loan of Euro 30 million to enhance the police communications sector.

The ministry said Austria as a security communications partner for a number of leading countries in the world, can also be identified as a strong country in the international telecommunications field.