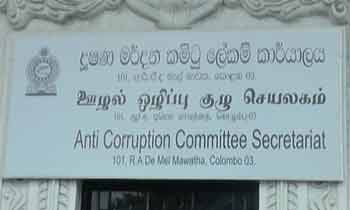 Officials of the Anti Corruption Committee Secretariat (ACCS) await response from the Prime Minister’s Office for further action, as the term of the much debated body that handled major scale corruption cases ceased to exist from Saturday, July 01.

The six-month term of the Secretariat that was renewed for the fifth time since January 01 this year to June 30 by a special Cabinet decision ceased to continue as it had not been validated by another term, which should have been approved in the last Cabinet decision making meeting that met on Tuesday, June 27.

A senior official at the ACCS disclosed to the Daily Mirror yesterday that the office would be closed for both the public and the staff from today onwards as they had no legal provision to continue their duties as usual.

He said several reminders made to the Prime Minister’s Office -both verbally and in written- last week about the imminent expiry of the term of the Secretariat, had not raised any concerns so far and they were yet to receive any response.

He said the officials that had been assigned to carry out the duties of the ACCS were actually absorbed from a range of State Departments and offices, where they were expected to report back from today. (Kurulu Koojana Kariyakarawana)