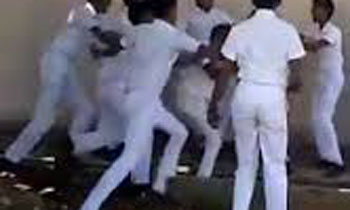 At least eight students were hospitalised after a clash between students of Ananda and Nalanda Colleges in Colombo yesterday afternoon, police said.

The injured were admitted to the National Hospital, Colombo.

Five students were arrested by the Borella Police and ten students from the Maradana Police in connection with the incident.

Police said a CTB bus and another private bus were damaged due to the clash in Borella while a car and a van were damaged in Maradana.

Meanwhile, three students were admitted to the National Hospital due to a separate clash among students of the D. S. Senanayake College, Colombo yesterday afternoon, hospital sources said.(Darshana Sanjeewa)