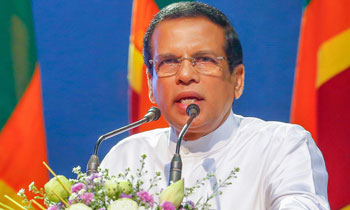 The 2018 Budget is expected to offer an all-inclusive relief package for loans obtained from banks and other financial institutions by low income families, President Maithripala Sirisena said.

He said he was aware of the huge burden placed on poor families when repaying their loans and that especially the families in the North East have become victims of private banks and financial institutions under the ‘Micro Finance’ programmes launched by them after the war.

Addressing the inauguration of the ‘Gramashakthi Peoples Campaign’ held at the Sugathadasa Indoor Stadium, the President said private banks and financial institutions descended on the North and East soon after the war and motivated most of the families to obtain loans under their Micro Finance’ programme. He said this was before state banks and approached these cash-strapped families.

“The officials of those banks and finance companies filled the forms and offered loans to low income families. Now they are forcing them to repay their loans with interest which is beyond the means of these people. I have been told that officials have even threatened them with forfeiture of their houses and their lands if they failed to pay back the loans. Therefore, the government has decided to offer a relief package in the 2018 Budget to save these people from the burden of loans obtained from private commercial banks and finance companies targeting low income families,” the President said.

He said the people in the North and East accepted those micro loan packages without thinking about the repercussions.

The President said the main objective of the ‘Gramashakthi’ programme was to lift the living standards of the lowest segment of the society by eradicating poverty, hunger, ill health and achieve sustainable economic progress.

He said statistically, the poverty ratio in Sri Lanka was around 7% of the population or those who live on less than US$2 a day. “But we are focussing on minor employees of the state and private sector who draw extremely meager salaries. Are we aware of the self employed people who struggle to earn enough to feed their family. Have various government projects such as Samurdhi, Gemi Diriya have been able to eradicate poverty,” he asked.

Presidential Secretary to President Austin Fernando delivered the welcome address and an introduction to the programme while Minister S.B.Dissanayala also addressed the gathering. (Sandun A Jayasekera)