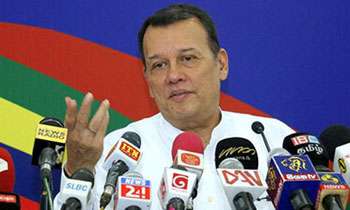 Minister Mahinda Samarasinghe today said that alleged assassination plot on President Maithripala Sirisena and former Defence Secretary Gotabhaya Rajapaksa, ‘is serious than we think as several individuals have been involved in it and called on the CID to investigate it thoroughly.’

Addressing the media the Minister also said that the CID investigations on the alleged assassination plot had taken a different turn after the media reports that an Indian has met Police informer Namal Kumara, who exposed the alleged conspiracy.

“It seems that the alleged plot is serious than we think as several individuals have involved in it. The CID must go to the bottom of the conspiracy, expose all those involved if there was an assassination attempt, and take strict legal action against perpetrators without delay,” Minister Samarasinghe said.