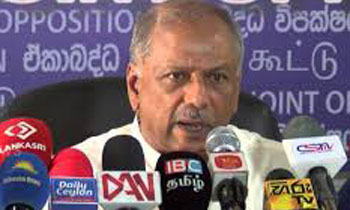 The Joint Opposition today made a request to President Maithripala Sirisena to advise Foreign Affairs Minister Mangala Samaraweera to safeguard the country’s freedom, integrity and the Constitution while dealing with the Geneva Proposals.

Joint Opposition Leader MP Dinesh Gunawardena told a news briefing that it was the government’s responsibility to work on the proposals which were in favour of our country rather than continuing with the ones which were against it.

“Several people mocked at us when we have once said the hybrid courts are not feasible in Sri Lanka. After several months the President and Prime Minister have also agreed to the same fact,” he said.

However, he said the discussions have being held in Geneva, requesting for more time to continue with the Geneva Proposals by Sri Lanka

Meanwhile, the JO condemned the suppression on the university students who were protesting against the South Asian Institute of Technology and Medicine (SAITM) in Malabe by the government.

“The conditions have worsened at present regarding the SAITM issue in comparison to the controversy which has taken place in establishing the North Colombo Medical College, the first privately funded medical school in the country,” he said.

He also urged the President to arrive to a decision on the issue immediately in a justified manner without taking wrong steps.

Joint Opposition MP Dullas Alahapperuma said they would launch a country-wide protest campaign starting from March 18 against the government’s continuous postponing of Local Government election; “As the initial step we will launch a protest campaign in Ratnapura,” he added. (Kalathma Jayawardhane)