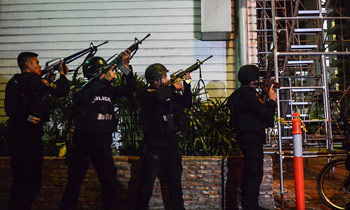 The gunman who stormed a Manila hotel casino has died after setting himself on fire during an armed siege that is feared to have injured dozens of people in Manila.

The shooting started at the popular Resorts World Manila in Pasay City, Philippines at about midnight local time and terrified witnesses described ‘two hours’ of panic.

Explosions were also heard coming from the tourist hotpot and bloodied victims were seen being stretchered out of the building.

Witnesses said at least one masked gunman stormed the second floor of one of the complex’s four hotels and fired at guests and staff. Some seven hours after the attack began police confirmed the gunman had killed himself. (Daily Mail)