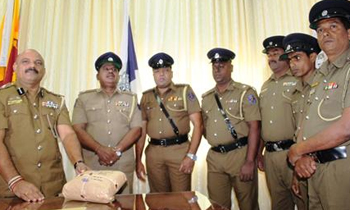 The Vavuniya Division Anti-Vice Squad said 2.266 Kg of heroin worth more than Rs.30 million has been taken into custody on Thursday when it was on the verge of being transported to Colombo from Jaffna.

A suspect from Jaffna who was about to board a bus to Colombo, was nabbed by officers of the Anti-vice Squad who had taken him into custody on a tip-off received by them at the Vavuniya bus stand. They had received information that the suspect was a resident of Velvetithurai in Jaffna through whom it had been arranged to send heroin to Colombo.

A team of Police officers under the directions of Senior DIG Roshan Fernando in charge of the Northern Province and the DIG in charge of the Vanni Division, Deshabandu Tennakone had taken the heroin into custody. (Romesh Madhushanka)