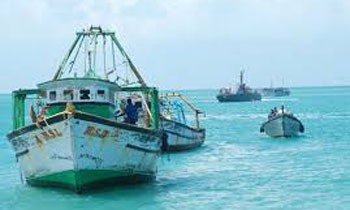 Thirteen Indian fishermen had been arrested by the Sri Lankan Navy for engaging in illegal fishing in the Sri Lankan territorial waters in the seas off Kachchathivu Island this morning, Navy Media Spokesman Commander Dinesh Bandara said today.

He said that a Fast Attack Craft attached to the Northern Naval Command arrested the fishermen along with two trawlers.

The fishermen were handed over to the Assistant Fisheries Director of Jaffna for legal action.
Meanwhile, Indian media alleged that the Sri Lankan Navy personnel had damaged a few more boats and fishing gear belonging to the flotilla of Indian fishermen using iron rods, before chasing them away.

The Indian media cited Indian Assistant Director of Fisheries A. Manikandan as saying that more than 2,000 fishermen from Thangachimadam had ventured into the sea on Wednesday in 523 boats and were fishing near Kachchathivu, when the Sri Lankan Naval men came to the spot and arrested the 13 fishermen.

“They also snapped the fishing nets of 50 boats and damaged some boats using iron rods,” he was quoted as saying. (Chaturanga Pradeep)