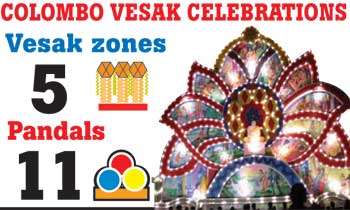 While stating that 3,000 police personnel will be deployed on Vesak Day for the security of the people and traffic controls in the Colombo City, Police Spokesman SP Ruwan Gunasekara said five Vesak zones will be held in Colombo including 11 pandals.

“We have arranged a special operation on Vesak Day ensuring the security of the people and the traffic controls. 1900 police personnel will be deployed around the Vesak zones while 1100 will be deployed as traffic police officers. Moreover, Panadura-Walana Central Anti-Corruption Unit will also be in action to raid drug peddlers,” SP Ruwan Gunasekara said.

Meanwhile, he said 23 deaths were reported in 2016 and 40 deaths 2017 respectively during the Vesak seasons due to traffic accidents.

“When considering the traffic accidents during festive seasons, most of the accidents were caused due to the negligence of the motorcycle riders. Therefore, the motorcycle riders should be more mindful of their driving so that most of the traffic accidents can be minimized,” SP Gunasekara added. in a lavotry at the Bandaranaike International Airport (BIA) this morning (Sheain Fernandopulle)