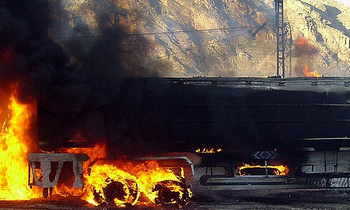 At least 100 people were killed when a lorry transporting oil burst into flames in the Pakistani city of Bahawalpur, International media reported.

They say dozens of people were badly burned as they tried to collect fuel leaking from the vehicle. Those injured are being treated in hospital.

Firefighters are now at the scene tackling the blaze.

Unconfirmed reports suggest the tanker had overturned because of speeding, and later caught fire.

Eyewitnesses say some people were smoking at the scene of the accident, which could have started the fire, Pakistan’s Geo TV reports.

There are fears that the death toll could rise further.

Pakistan’s media published pictures from the scene, showing a number of charred vehicles.(BBC)