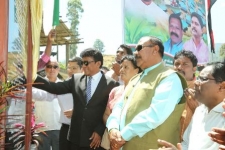 Foundation stone for the construction of 355 houses in Bogawana estate on grant basis under Indian Housing Project was jointly laid by P. Digambaram, Minister of Hill Country New Villages, Infrastructure and Community Development and Deputy High Commissioner of India, Arindam Bagchi on 13 February.

This project is part of Government of India's commitment to construct 50,000 houses in Sri Lanka. Around 45,400 houses have already been completed in the Northern and Eastern provinces. Another 4,000 houses will be constructed in the Central and Uva Provinces. Construction in two estates-Dunsinane and Diyagama West in Nuwara Eliya-have already commenced.

The total grant of Rs. 950,000 per house is released in four tranches, linked to the physical progress, directly to the beneficiaries. The Estate Workers Housing Cooperative Societies will assist in construction of the houses. International Federation of Red Cross and Red Crescent Societies will provide the technical assistance. The project will be implemented in close consultation with the Ministry of Hill Country New Villages, Infrastructure and Community Development and Plantation Human Development Trust.