You are here: Home / GOSL News / High Commission in London commemorates the 69th Anniversary of Independence 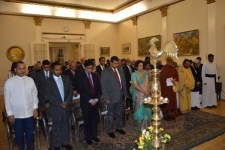 High Commission of Sri Lanka in London commemorated the 69th Anniversary of Independence with the representation of all the communities on 4th February at the High Commission premises.

The program commenced with the hoisting of the National Flag by High Commissioner Amari Wijewardene. The National Anthem of Sri Lanka was sung in Sinhala followed by the observance of two minutes' silence in remembrance of the fallen heroes of the nation. Religious observances were conducted by Ven. Bogoda Seelawimala Nayaka Thero, Supramaniya Kurukkal, Rev. Fr. Daya Perera, and Moulavi Mohamed Anas.

High Commissioner Amari Wijewardene, in her address, stated that the commemoration of our independence is in many ways an occasion for us to celebrate the lives of our national heroes and to assess the path that our country has taken over the past 69 years. Quoting the President of Sri Lanka, she stated that “…the realization of the true meaning of freedom and independence lies in our potential to free ourselves from the shackles of all kinds and forms of poverty and ill-health, and confines of diverse identities of race, religion and caste, and enrich ourselves, as a society that values equity and rights of all,” and called on everyone to resolve to this endeavour in every possible way.

The event concluded with the singing of the National Anthem in Tamil. The Independence Day messages of the President, Prime Minister and Minister of Foreign Affairs were made available to the guests in Sinhala, Tamil and English languages.

On 06 February 2017, the High Commissioner hosted a reception for the representatives of the diplomatic corps, Foreign and Commonwealth Office, Lords and Members of the House of Commons, representatives of the international organizations based in London, Mayors, Councillors, academics and the business community in London. Rt. Patricia Scotland, Commonwealth Secretary General and Marshal of the Diplomatic Corps Sir Alistair Harrison were among those present.

Welcoming the guests, High Commissioner Wijewardene highlighted the present government's efforts on reconciliation and peace and the aggressive development plan carried out throughout the country. She noted the shared historic and cultural ties between the two countries and stated that Britain has and will be, a very important bilateral partner for Sri Lanka. The High Commissioner concluded her address with a toast to the good health of the Queen and to the people of the United Kingdom.

Laura Clarke, Head of South Asia Department of the Foreign and Commonwealth Office made very positive remarks on Sri Lanka – UK relations and the current dynamics which would help in further consolidating the political, economic and cultural relations between the two countries. She concluded her speech by raising a toast to the people of Sri Lanka.