You are here: Home / GOSL News / Fumigation machines from Germany to control Dengue 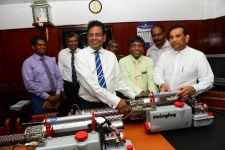 Thirty fumigation machines for controlling the Dengue mosquitoes were distributed among the MoH Divisions in Western Province by the Health Minister Rajitha Senarathne this morning (23rd Feb.) at the ministry.

The fumigation machines each valued at Rs.150, 000 were imported from Germany. Ten each were distributed among Colombo, Kaluthara, and Gamapaha Districts.

According to the minister, in Western Province, 500 field officers will be recruited immediately for fumigation and the inspection of the households.

During this year, 15, 180 suspected dengue patients were recorded to the Epidemiology Unit. About 43.05 per cent of them are from the Western Province.