By Chandeepa Wettasinghe
As the anti-globalization movement continues internationally, Sri Lanka must form stricter controls on immigration, and communicate this to the public to avoid further local unrest, according to Former Sri Lankan Diplomat Sarala Fernando. 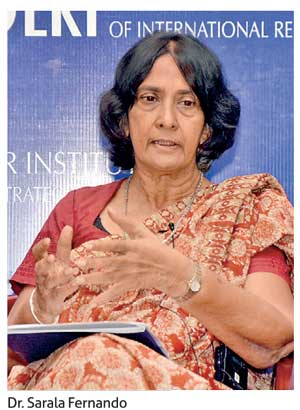 “One way would be for the government to provide much more assurance to the public of stricter control over job visas, which are inevitable and perhaps the current abuse of tourist visas for work. They need to be able to talk to the people in this sense, to be at the front end, rather than be at the crash landing,” she said.

Fernando, who was a Former Ambassador of Sri Lanka in Geneva, was speaking during the panel discussion of the ‘A Recovering Global Economy? The Dynamics of China and India in the Future of Global Growth’ event held at the Lakshman Kadiragamar Institute.

She said with the unstoppable digitalization drive, opposition is rising against globalization, even in western countries, and this may lead to a tipping point and create new shifts in international relations, backed by pressure created daily on the increasing frequency of both natural and man-made disasters.

Fernando noted that in Sri Lanka, the resistance against globalization may be manifesting in the opposition to the Economic and Technological Cooperation Agreement (ETCA) with India, and the private medical school at the South Asian Institute of Technology and Medicine (SAITM).

“The tipping point will come over the freedom of movement, and here I feel whether some of this unease is spilling over into the public demonstrations we have over SAITM and ETCA, and the feeling that local jobs must be protected at all costs, even though obviously, there is an element of opposition politics also involved,” she said.

She added that in the case of SAITM, the government was dealing with the issue during the crash landing.

In the case of job visas, Finance State Minister Eran Wickremaratne recently said that the government is working to further streamline visa approval processes for faster approvals, and give the decision-making power to the Immigration and Emigration Controller, based on the needs of Sri Lankan employers.

Tens of thousands of jobs are available in industries such as apparel, hospitality, plantations, ship building and construction, but there is limited availability of local labour. Many employers are now requesting the government to allow more foreign labour employment.

However, some professionals are campaigning against the importation of foreign labour.

Central Bank Governor Dr. Indrajit Coomaraswamy recently said that there is no local labour shortage, but government policies are keeping a large portion of labour trapped in poverty in the agriculture sector by providing subsidies to farmers.