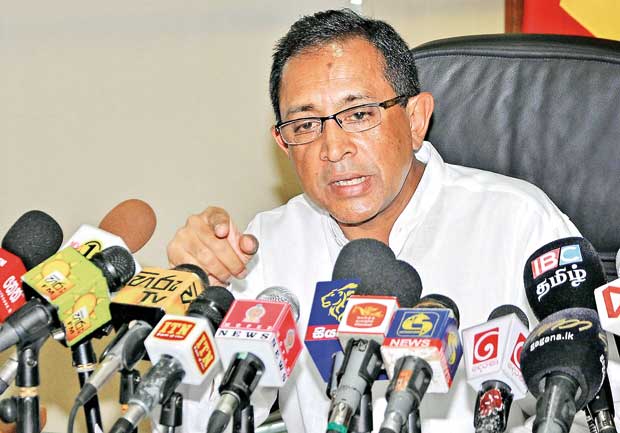 By Chandeepa Wettasinghe
The government would go for a fresh round of bidding for the management contract of SriLankan Airlines if the Prime Ministerial Committee tasked with choosing a finalist is not able to do so within the next 1-2 weeks, Public Enterprise Development Minister Kabir Hashim said yesterday.
“During the last meeting of the Cabinet Committee on Economic Management, the Prime Minister said that if a suitable candidate cannot be chosen from the shortlist, a new committee headed by myself and comprising of Malik Samarawickrama and Sarath Amunugama should call for fresh bids,” he said.
Hashim said that currently a Special Committee appointed by Premier Ranil Wickremesinghe is evaluating the three shortlisted candidates, and the results would be known in 1-2 weeks.
The shortlisted candidates are the American private equity firm Texas Pacific Group (TPG), Supergroup which has connections to the Maldives, and PeaceAir which is owned by a local, but funded by partners from a number of countries including Switzerland and Monaco.

“These 3 companies have no experience in operating an international airline but TPG is one of the best business restructuring companies,” Hashim said.
He noted that airline companies such as Qatar Airways which had held initial discussions with the government on acquiring SriLankan last year, had not shown interest when bids were called.
Hashim added that of the 9 initial bids, only these 3 companies had met the initial conditions of the expression of interest, and that the shortlisted companies now have to prove their ability to fund the acquisition of a minority share in SriLankan, and agree to other government conditions.
PeaceAir, which this week refused to disclose how it has generated US$ 8.8 billion in funding it has pledged to invest in SriLankan, had alleged that the bids are being rigged, and that no one in their right mind would refuse US$ 8.8 billion it is offering.
The government is currently looking for support for the country’s foreign reserves.
It had also said that PeaceAir would undertake the US$ 1billion in accrued losses the government would have to write off if the management contract is won by any of the other bidders. Further, it had alleged that the government is delaying the due diligence process for the shortlisted candidates.

Hashim however said that the process is ‘very transparent’, and that the bidders are free to start due diligence processes after contacting the bid manager, the state-owned National Savings Bank.
Meanwhile, he said that the government is looking for the winner of the management contract to purchase a minority share of the airline, although the degree of ownership will depend on negotiations.
“We want SriLankan to retain the national carrier status. So the government will own 51 percent,” he said.
However, he also added that if the winner of the contract is a local company, or if a foreign entity that wins the contract is willing to form a consortium with a local company, the government is open to discussion on divesting more than 49 percent of the shares.
However, he said that the government is not willing to divest 100 percent of SriLankan shares.
PeaceAir said that it is looking to acquire 70 percent of SriLankan shares.
SriLankan has accumulated losses amounting to nearly US$ 1 billion at the end of the 2016 financial year, while its liabilities also reached a similar figure, according to its latest annual report.

Creating fresh controversy within the national carrier, Public Enterprise Development Minister Kabir Hashim yesterday said that the Weliamuna Report which highlighted corruption and mismanagement in SriLankan Airlines is accurate, unlike claims made by SriLankan Chairman Ajith Dias.
Dias had recently said that there had been no financial misappropriations within SriLankan as stated in the Weliamuna Report and that the allegations in the report, created by eminent attorney J. C. Weliamuna, contained rumours and personal information which no one should be airing out in public.
“That is his (Dias’) opinion. Everybody has a right to an opinion, but I am not in that state of mind.

I think that the Weliamuna report has merits and it has to be implemented,” Hashim said during a media briefing.
However, he also admitted that his opinion may be wrong, and that Dias’ opinion may be right.
The Weliamuna Report had contained the salacious details of the lives led by relatives of Former President Mahinda Rajapaksa at the expense of the national carrier.
It had also contained allegations of wide-scale corruption and mismanagement undertaken by the Former President’s relatives as well as staff members of SriLankan.
“That report makes allegations against past misconduct within SriLankan. Inside this (SriLankan) there is a mafia,” Hashim said.
He noted that the Criminal Investigations Division has started investigations into the allegations made in the Weliamuna Report, but said that he was not aware if the mafia is trying to stall such investigations.

“It’s taking time, like all the other investigations. These are complex cases. I’m sad that within SriLankan, there needs to be changes to management for the airline to be clean. The airline isn’t clean enough, but I won’t give up either,” he added.
However, Hashim stressed that he will enact changes and punish wrongdoers using the correct procedure, no matter the delays in following such processes.
“Otherwise people will say that these are acts of political revenge,” he said.