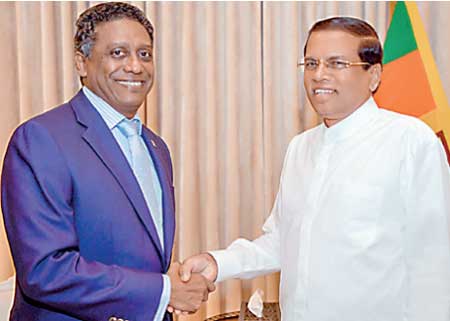 The President of Seychelles Danny Faure praised President Maithripala Sirisena’s campaign against illegal drugs and said his country would extend its fullest cooperation to Sri Lanka’s endeavour to stop drugs and narcotics smuggling. He said this when he called on President Sirisena at the President’s Official Residence today on Monday.

President Faure said Seychelles also faced the menace of drug smuggling and said the two countries could share intelligence on drugs smuggling in their joint fight against drugs.

President Faure thanked Sri Lanka for providing high professionals to Seychelles and said: “Our students learn from Sri Lankan teachers, your doctors look after our health and your legal experts provide us excellent judiciary services.” He said former Attorney General of Seychelles Anthony Fernando is also a Sri Lankan and he is now a respected judge. “Now we do not go to Europe for legal expertise, we come to Sri Lanka,” Seychelles President said.

President Faure invited President Sirisena to be the chief guest at a function to be held in October 2018 to mark the 30 years of diplomatic relations between the two countries.