Faced with scathing criticism over the lack of firm action to address the alleged bond scam, the Sri Lanka Freedom Party (SLFP) yesterday defended its position to delay the appointment of the presidential commission to investigate the dubious transaction, stating that it waited for the “right time”, while taking steps to place restrictions on the funds belonging to the primary dealer involved. 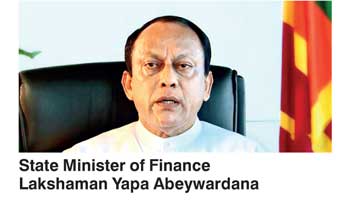 A day after the parliamentary debate on the Committee on Public Enterprises (COPE) report, which called for the Speaker to take action on the matter, State Minister of Finance, Lakshaman Yapa Abeywardana, highlighted the need for a presidential commission to be appointed to ensure that the investigation was carried out without delay or “influence from any party”.

The decision to appoint the presidential commission, which is yet to be named by President Maithripala Sirisena, was taken at the right time, Abeywardana stated. Although such a move by the President had been anticipated since the tabling of the COPE report last year, the announcement on the presidential commission came only a day before the parliamentary debate on the COPE report on the 2015 bond transaction.

However, Abeywardana told journalists yesterday that the decision was made after it was clear that all other investigative options would take longer to take action.

“After the COPE report was sent to the AG, he sent a letter to the IGP to investigate it on 10 January and the IGP sent it to the CID. The CID has said it should be done by the civil department and they don’t know how long they will take to investigate. The presidential commission appointed will be given a timeframe of three months. They can request for only a short extension of the time period,” he said. Last month the SLFP appointed a committee of nine senior party members to study the COPE report and recommend a suitable course of action to be taken by President Maithripala Sirisena. One of the recommendations of the committee was to appoint a presidential commission to investigate the issue.

The commission will be tasked with investigating a number of issues related to the controversial bond issuance, Abeywardana said.

“The commission will be asked to investigate how Perpetual Treasuries earned Rs. 10 billion in profit and how the Central Bank, which announced the auctioning of only Rs. 1 billion worth of bonds, ended up trading Rs. 10 billion worth of bonds. We have also recommended that they should investigate how Perpetual Treasuries bought Rs. 5 billion or 50% of the bonds in the sale,” he said. Abeywardana claimed that the areas for investigations were outlined in detail in the recommendations given to the President by the SLFP.

The recommendations also included investigations into how the Employee Provident Fund arrived at an agreement with a primary dealer, Perpetual Treasuries to buy the bonds in the secondary market.

“We have recommended investigations into EPF transactions. Can they negotiate with a primary dealer? Why did the EPF buy from the secondary market? And what about the loss incurred by the Government in the transaction,” Abeywardana explained. The State Minister also claimed “a large number of ethics relating to bond transactions have been violated” including good market practices and ethics, Central Bank bond issuance procedures and ethics-related to auctions. He also said that the commission would explore the possibility of earning back all the losses incurred by the Government from the alleged scam.

In the meantime the Government has taken steps to put restrictions on the Perpetual Treasuries funds, Abeywardana revealed. According to him, a directive has been issued to ensure that funds from the accounts held by the primary dealer were not moved or transferred while imposing restrictions on the type of transactions allowed through the account.

Abeywardana also highlighted that the former Central Bank Governor had “no shame” to engage with any public office. In the statement Abeywardana issued to the media yesterday, the SLFP emphasised that “despite the President’s decision not to reappoint the Central Bank Governor due to the issues directly related to the bond issue and other related incidents, his participation in an advisory capacity should not be tolerated.”

“He should voluntarily refrain from participating in any state-related affairs until this matter is investigated,” Abeywardana said but fell short of accepting that Mahendran was sitting in finance ministry meetings as alleged by some politicians.