You are here: Home / Business Now / President gets tough, tells officials to comply 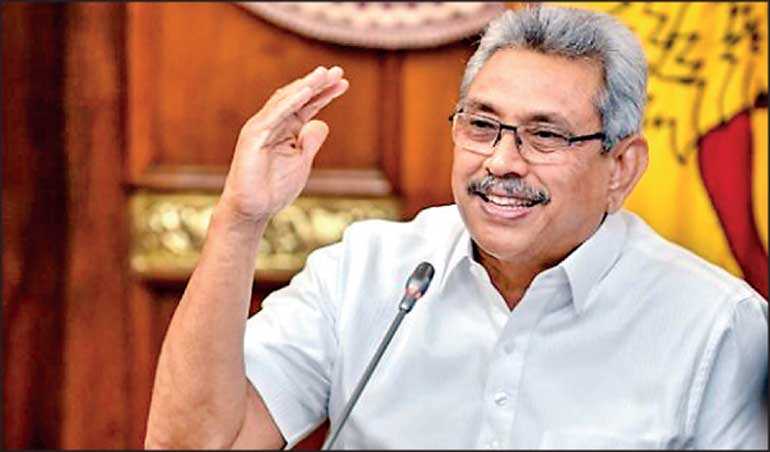 President Gotabaya Rajapaksa yesterday dished out a tough message to public officials at a meeting insisting they should comply with Government directives and policies or risk becoming a “burden” to the nation.

According to a statement released by the President’s Media Division (PMD) Rajapaksa had said that “irrational laws” should not obstruct policies formulated to achieve the economic objectives of the people. He had also added public officials have to dedicate themselves to resolving issues through discussions and implementing directives issued by the Government.

President Rajapaksa stressed that the State and affiliated institutions should not resort to legal measures and instead resolve their issues through discussion. Long-rooted legal issues between the State Timber Corporation and the Sri Lanka State Plantations Corporation were discussed in depth.

The President also emphasised the importance of removing the plantations that are not suitable to the country or harmful to environmental conservation of Sri Lanka and planting the crops most suitable to the country. “State institutions should be maintained without burdening the Treasury. It should not take long to present these strategies. Mutual understanding among State institutions and proper awareness about State policies will ensure that there would not be any conflicts among institutions.”

The President noted that a decision was taken to cease the importation of ethanol which had been “traumatising the economy” for a long time, and he added that he would not withdraw his decision due to any influence from businessmen. It was revealed during the meeting that State institutions had to resort to legal action as the affiliated institutions had not properly discussed their issues with each other.

It came to light that the Land Reforms Commission has filed over 800 cases and 300 out of them were against the Plantation Corporation. Plantations Minister Ramesh Pathirana and Secretary to the President Dr. P.B Jayasundera were also present at the discussion.

Sri Lanka Telecom Chairman Rohan Fernando handed over the cheque for this sum to President Gotabaya Rajapaksa at the Presidential Secretariat yesterday.

Mobitel Chief Executive Officer Nalin Perera and other members of the Board of Directors were also present at this occasion.

All the donations will be credited to the special account opened under the number 85737373 at the Corporate Branch of the Bank of Ceylon. Local as well as foreign donors have made their contributions to the Fund. Donations to COVID-19 Healthcare and Social Security Fund have been exempted from taxes and foreign exchange regulations. Deposits can be made through cheques or telegraphic transfers.