You are here: Home / Business Now / Petition proposed to facilitate franchise fairly amongst all youth

A new mechanism to enable all youth who turn 18 before an election date is declared has been proposed, Election Commissioner Mahinda Deshapriya said yesterday. 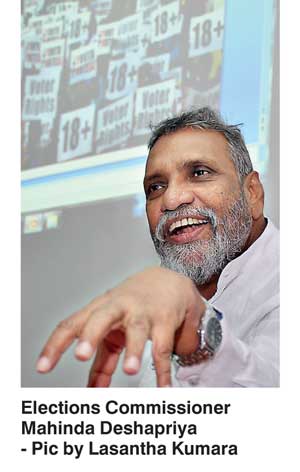 A petition to the Election Commission by Ravi Peiris with over 275,000 signatures has highlighted that over 400,000 new voters are left out by the current system, which uses the election registry which is prepared at an earlier date. Instead the petitioners propose that the commission maintain a running registry to include those who turn 18 during the year which is revised every four months.

“We always use a registry which is prepared at an earlier date, so some who have not turned 18 at the time of the revision of the registry but are 18 when the elections are announced miss out on the chance to vote. So we have proposed the maintenance of a running registry,” he said, speaking to journalists at a seminar held at the Department of Elections.

Taking on board all of Peiris’ suggestions, the commission plans to send the proposal to the President, Prime Minister and Members of Parliament with a request to amend the relevant act accordingly.

The proposal is part of a wider campaign launched by the commission to engage the younger generation in the country’s governance and politics.

The Election Commission this year will seek to engage the younger generation to encourage participation in the country’s democratic system, Deshapriya said, while launching the commission’s three-year strategic plan.

“The younger generation is not interested in even participating in an election, they don’t go to vote. If this trend continues there are serious issues that will crop up,” he warned.

Deshapriya highlighted that currently there were only 13 Members of Parliament who were under the age of 35. Those who fell within the 18-35 age bracket were considered youth in Sri Lanka, but the international definition considers individuals within the age range of 15-29 years belonging to the youth.

To engage the younger generation and create awareness, the commission has planned a number of outreach programs involving schools and the youth parliament, he revealed.

Elections Commissioner Mahinda Deshapriya yesterday expressed concern over delays in holding elections in the country, highlighting that it was a serious impediment to democracy.

“We hope that the elections are held soon and citizens’ right to vote is protected,” Deshapriya told journalists yesterday.

When asked why the Election Commission had not taken steps to hold elections, he highlighted that the decision to call for elections lay with Parliament.

“The Election Commission does not have the power to call for elections. That lies with Parliament which has delegated the authority to call local government elections to a Minister. He is the one who decides. Nowhere in the world has an Election Commission called for an election,” he said.