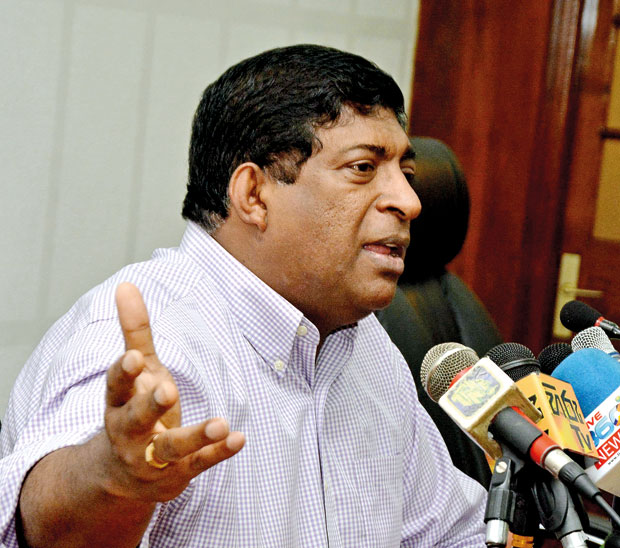 Sri Lanka has low levels of local savings, and has to depend on foreign borrowings to finance public spending.

While the temporary residency visa will come into immediate effect through an administrative order to the Immigration Department, Karunanayake said laws will follow 1-2 months down the line, which will also include permanent residency (PR) visa.

However, it should be noted that Karunanayake recently burnt his fingers by putting the Value Added Tax (VAT) amendments into effect administratively before legislating the changes, which the Supreme Court reversed.

Promises of enacting laws and delays in legislating them have been a hallmark of the current government.

Karunanayake said permanent residency (PR) will also be given in order to address the glut in the Sri Lankan luxury apartment market.

“They (PR holders) will be able to lease properties. This will help our innocent people who go to the Middle East. They can instead stay here and work (for the PR holders),” Karunanayake said. Harvard Kennedy School International Centre for Development Director Professor Ricardo Hausmann, who was in Sri Lanka this week said,  an increased level of foreign expatriates who bring their expertise to the country could help Sri Lanka with its export diversification efforts. Meanwhile, Karunanayake said currently foreign investors could avail themselves of a 5-year residence visa. This is under the Resident Guest Scheme.

He noted that the temporary visa scheme is targeting wealthy pensioners, especially from Japan, who like to stay in Sri Lanka for an extended period of time. This is presumably during months when the weather is cold.

“There are Japanese pensioners who like to come and live in Sri Lanka for 6 months. They can renew their visa as long as they keep their money here,” Karunanayake said.

This is not the first time that Karunanayake had requested investors to deposit money in Sri Lanka, where interest rates are much higher than in Europe or the US due to higher risk.

He has alos pushed for amendments in regulations, which now allow investors to pull out equal amounts of money they have deposited in bank accounts.

Early last year, Karunanayake revealed that a mystery investor was ready to deposit up to US$ 1 billion with the Treasury following the initial call for investments made in October 2015.

“But the last time we brought investors, the media shouted that this could lead to money laundering, and the investors left. So, we are saying now that we don’t want any terrorist money or ill-gotten gains. Other than that, no questions asked, but please publicize this so that investors will come here,” he said.

The government has lamented in the past that even Sri Lankan expatriates prefer to invest in Western countries, while females from poor rural backgrounds slave away in the Middle East and remit money that keeps the country’s economy afloat.

“The Central Bank Governor has a good soul,” Karunanayake said.

When reporters sought to clarify the difference in attitudes Karunanayake has exhibited over the span of seven days, he said that he stands by his past comments as well.

“I said that the Rajapaksas had put the economy in the ICU (Intensive Care Unit), and he (Dr. Coomaraswamy) was working for them. But he still has a good soul. It’s just one or two individuals who are the henchmen of the previous governor (Ajit Nivard Cabraal) who are distorting things,” Karunanayake stressed.

Karunanayake last week classified Dr. Coomaraswamy, who is a well-respected economist, as a hospital attendant in Rajapaksa’s ICU.

The comments came forth after Dr. Coomaraswamy diagnosed that the country’s economy is currently hospitalized but not in the ICU.

According to Karunanayake’s public comments and the 2017 budget, clear attempts are being made to significantly reduce the autonomous powers of the Central Bank and take such powers under his wing.

However, the private sector and a large number of economists have come to the defence of Dr. Coomaraswamy and an autonomous Central Bank.

The government yesterday requested media assistance in communicating its economic policy stances effectively, especially to the rural masses, after admitting that its public relations strategies may be flawed.

“I admit that there may be a flaw in our media. We may not be communicating our stances well to the public, so please, help us,” Karunanayake told a press briefing.

He however alleged that private media institutions are not communicating government policies well, and place a greater emphasis on promoting views of the opposition.

“When we provide you with some data you don’t publish them. When Rajapaksas give you something, you give it full coverage,” he complained.