The manufactured exports sector has begun 2020 on a negative note, with January’s performance down 7.4%, prompting the private sector to fear more challenges, given the impact of 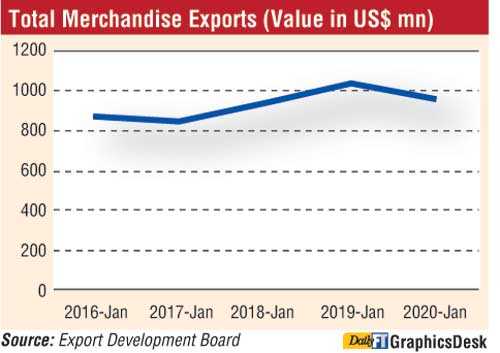 the coronavirus global pandemic, and local incentives and policies awaiting the conclusion of General Elections to become law.

The Export Development Board revealed yesterday that merchandise exports declined by 7.4% to $ 961 million and services exports are estimated to have risen by 26% $ 437.5 million as per provisional data. Total exports including services managed to grow by 0.96% to $ 1.39 billion from a year earlier.  The biggest exports, apparel, were down by 0.5% to $ 472 million, whilst tea declined by 10% to $ 997 million and rubber-based exports by near 13% to $ 73 million.

“The overall export turnover increase in January 2020 is indeed a positive note.

“The global slowdown in the material handling and construction tire business is the reason for drop in rubber exports; the situation will get aggravated with the virus in Europe and US,” Subasinghe told the Daily FT.

EDB clarified that the figure for service exports has not yet been released, and the EDB has projected figures based on past published records. It was revealed that in the year 2019, the exports recorded over one billion in comparison to the figures of the last five years.

The main export destinations in January were the United States of America ($ 268 million) followed by the United Kingdom ($ 85 million), India ($ 63 million), Germany ($ 52 million), Italy ($ 46 million), Belgium ($ 30 million) and Netherlands ($ 23 million). It is notable to record that out of the top 10 export destinations, only three markets, namely Italy, China, and Bangladesh, recorded a year on year growth, whilst the other markets are not performing well. Over 53% of the merchandise exports have moved to the top five markets, namely US, UK, India, Italy, and Germany, whilst only 47% of goods have moved to the rest of the markets globally.

The main exports to USA were apparel ($ 193 million) – a drop of $ 10 million, pneumatic rubber tires and tubes ($ 14 million) and gaskets, washers, and seals of hard rubber ($ 2 million). The exports to the United Kingdom during the month of January included apparel ($ 63 million) and small quantities of products namely, footwear, frozen fish, coco-peat/fibre.

It was also noted that the industrial products, namely apparel ($ 27 million), tires and tubes ($ 5 million) gaskets, washers, seals under HS 40169390 of hard rubber ($ 1 million), and tea ($ 6 million) moved to Germany in considerable quantities.