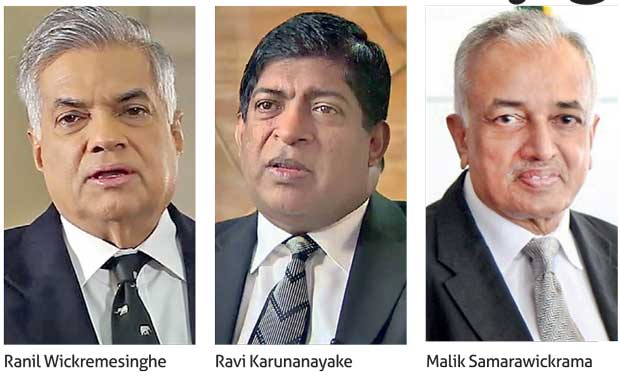 By Yohan Perera
Sri Lanka will finalize trade agreements with India, China and Singapore by June this year, the Sri Lankan delegation attending the World Economic Forum said yesterday.
This was revealed by the Sri Lankan delegation led by Prime Minister Ranil Wickremesinghe during a media briefing in Davos, Switzerland.
“We hope to complete the negotiations with India, China and Singapore by June this year,” Development Policies and International Trade Minister Malik Samarawickrama specifically told the briefing.
“We expect existing investors to expand their investments and expect new investors as well,” he added while highlighting that the government is banking on the Sri Lankan diaspora to step in for investments.
Prime Minister Wickremesinghe who elaborated on the trade agreements that are being lined up said, Sri Lanka will be going in for separate trade agreements with five Southern Indian states, including Tamil Nadu.

In addition he said, Sri Lanka would be looking at entering into a trade agreement with the ASEAN rather than going for separate trade pacts with the member states of the region.
“We will also have trade ties with Japan,” he added.
Announcing further plans to lure the much needed foreign investments into the country, Wickremesinghe said the government will come up with a tax incentive programme for investors.
Minister Samarawickrama, who elaborated on the progress the country has made in infrastructure development said, the Southern Expressway extension up to Hambantota and the Central Expressway up to Kandy will be completed within next two and a half years.
Finance Minsiter Ravi Karunanayake said the Sri Lankan economy cannot depend on a 23 million population and therefore should venture into foreign markets.
“The perilous economy which we inherited from the previous regime had been brought somewhat under control,” he stated.
Digital Infrastructure Development Minister Harin Fernando said the government would introduce an overall digital payment platform this year while focusing on digital technology education and developing other digital infrastructure facilities. 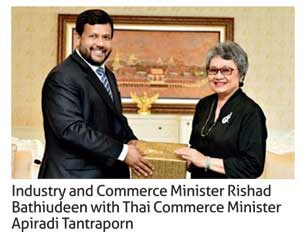 Sri Lanka is currently conducting FTA negotiations with China and Singapore, and a deeper trade pact with India.  In addition to Thailand, the government has mentioned its interest in signing FTAs with Japan, South Korea, Bangladesh, Malaysia, Turkey, the US and the UK. FTAs are already in operation with India and Pakistan.
Meanwhile, Bathiudeen has requested technical assistance from Thailand in the areas of gem and jewellery, food processing, agriculture, electronics and automobile components, the Ministry said. It added that he had also requested 2-3 Thai dry fruit manufacturing companies to invest in Sri Lanka, and requested cooperation in OTOP (One Tambon, One Product) local entrepreneurship programme that is present in Thailand.
“The Thai Commerce Minister mentioned that the Thai government will continue the support for jewellery designing in future also adding that she will check with the Ministry of Interior for the possibility of cooperation in OTOP projects and also provide support to identify companies to invest in dried fruit areas in Sri Lanka,” it said.
“Regarding the agricultural cooperation between the two countries, she (Tantraporn) agreed to seek the assistance of TICA (Thai International Cooperation Agency) to bring agriculture experts to Sri Lanka,” the ministry statement added. Thailand exports sprats, rice, canned fish, green gram, sago seeds, shoes and vehicle parts to Sri Lanka. Bathiudeen said that Ceylon Tea could be exported to Thailand.
He had also met with Thai sugar giant Mitr Phol Sugar Corp Ltd to inquire about its capacity to import sugar to Sri Lanka, since sugar importers have halted imports from Brazil due to concerns of cocaine being trafficked under the guise of sugar imports.