The Government has proposed draft legislation to criminalise disappearances in line with its international obligations, even as the country grapples with the legacy of 65,000 people still missing after two insurgencies and a civil war.

The International Convention for the Protection of All Persons from Enforced Disappearance Bill was gazetted by order of the Prime Minister on 9 February. Cabinet approval was granted to gazette the enforced disappearances bill on 7 February, Foreign Minister Mangala Samaraweera said. 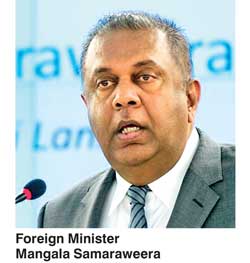 The Enforced Disappearances Bill must be supported by a simple majority of the House to be enacted into law.

The Bill, if enacted, will give effect to the UN International Convention for the Protection of All Persons from Enforced Disappearance that the Government of Sri Lanka ratified in May 2016. Under the convention, the country has an obligation to enact local laws to criminalise enforced disappearance and offer protection to victims of the crime.

According to Section 3 of the Bill, any public officer or person acting with the authority or support of the State, who “arrests, details, wrongfully confines, abducts, kidnaps” and refuses to acknowledge the arrest, detection, confinement or abduction, conceals the fate of such a person or refuses to disclose the person’s whereabouts, will be guilty of the crime of enforced disappearance.

Under the provisions of the Enforced Disappearances Bill, the crime is punishable by a prison term not exceeding 20 years and a fine of Rs. 1 million. Persons convicted of the crime of enforced disappearance will also be liable to pay compensation of no less than Rs. 500,000 to a victim.

The Bill also guarantees that victims and relatives of victims will have the right to know the truth about the circumstances of an enforced disappearance, progress and results of the investigation by law enforcement and the fate of the disappeared person.

Where there are reasonable grounds for believing that a person has been subjected to enforced disappearance, law enforcement is mandated to investigate even without a formal complaint, the Bill stipulates.

The Bill also seeks to outlaw secret detention of persons if enacted into law, stipulating that any person “deprived of liberty” will have the right to communicate with and be visited by relatives, a lawyer or any person of his choice.

The Enforced Disappearances Bill also seeks to demonstrate the Government’s commitment to implementing the UN Human Rights Council (UNHRC) Resolution of October 2015 which was co-sponsored by Sri Lanka, ahead of the Council’s 34th Session which begins on 27 February. Operative Paragraph 13 of the Resolution welcomes the Government’s pledge to sign and ratify the International Convention on Enforced Disappearances and criminalise disappearances under Sri Lankan law.

Last year, the Government enacted legislation to set up the Office of Missing Persons to investigate disappearances. However, six months later, the OMP is yet to be established. At the Cabinet meeting last week, the Government approved a proposal to incorporate a final amendment to the OMP Act, proposed by the JVP, which would deprive the Office of some of its powers to enter into agreements in order to achieve its mandate. The move was widely criticised by civil society activists, as an attempt by the Government to dilute the powers of the OMP.

However, while they do not constitute a catch-all clause like the section that may be deleted, several other provisions of the OMP Act would permit agreements between the Office of Missing Persons and other parties where necessary, authoritative sources told Daily FT.

AFP: Sri Lanka arrested nearly 550 soldiers in a single day as it reins in the mass desertion that’s plagued the armed forces since the end of the civil war, an official said Monday.

The military has been pursuing nearly 43,000 deserters who refused to voluntarily turn themselves in under a Government amnesty designed to clean up the ranks.

Arrests have begun in earnest since the grace period expired in December, ending any hope soldiers had of avoiding a court martial.

The mass apprehension of 546 soldiers during a sweep on Thursday was “the largest ever”, brigadier Roshan Seneviratne told AFP.

“Those who surrendered during the one-month amnesty period could either rejoin the service or be legally discharged,” he added.

More than 9,000 officers and soldiers took advantage of the amnesty, turning themselves in to avoid punishment.

Sri Lanka’s army, navy and Air Force have a combined strength of just over 275,000 personnel, but desertion has been a serious problem throughout its history.

Soldiers routinely walked off the job during the 37-year war against Tamil separatists which ended in May 2009, but desertion remained an issue even after combat had ceased.

Officials say peace time desertions were due in part to a reduction in risk-related allowances paid to soldiers, and the growth of better paying jobs in the private sector.

Many have found work in construction and transport, while police have reported the involvement of deserters in gun-related crimes.More than 25,000 security personnel were among at least 100,000 people killed during Sri Lanka’s civil war.