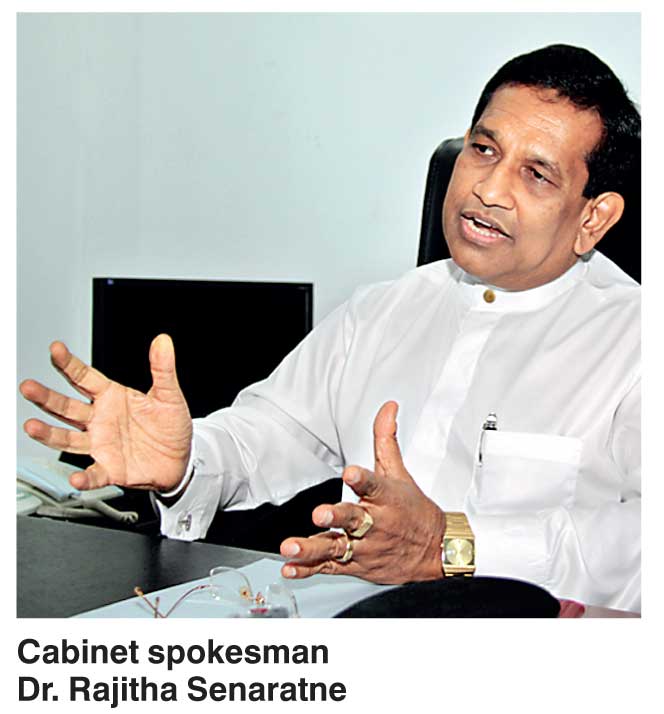 The Government yesterday defended removing the decriminalisation of homosexuality from its National Human Rights Action Plan, insisting that it could be “misinterpreted” for legal reasons but bizarrely claimed that prosecution of homosexuals was rare and it would not infringe on sexual minorities.

Cabinet spokesman Dr. Rajitha Senaratne came in for a barrage of questions from the media during the weekly Cabinet briefing on Government efforts to meet the requirements for GSP+. Denying that the European Union had imposed conditions for regaining GSP+, he backed the Government implementing stronger human rights measures as positive for the country.

“The Government is against homosexuality. The EU cannot object to this as they also faced massive objections from the Church for a very long time. It is only recently that they have made progress on these points and just as the EU has the Church we have our temples,” he said.

Dr. Senaratne also slammed MP Rathana Thero, who this week announced that he would be leaving the Government to sit as an independent member of the House, for his statements on human rights issues and the new Constitution. The Cabinet spokesman stressed that all members of Parliament had the right to object to the Constitution, which he pointed out was still at a formulation stage and no final decisions had been taken.

“All parties are part of the process to formulate the new Constitution. It is not just one person and it is not done to undermine the sovereignty of the country. As an MP, Rathana Thero has the freedom to object, campaign against and introduce changes to the draft documents at any point. Personally I think that it is a positive development to have people criticise the Government. That is the democratic process. Nowhere in the world is there a Government that does not face dissent from time to time.”

Dr. Senaratne also dismissed speculation that the change of stance by Rathana Thero reflected deepening divisions within the Government that threaten to break apart the coalition. “The Government is not perfect,” he acknowledged, “but it is still far better than the previous Government.”

The Cabinet spokesman also railed against critics of the Hambantota Port deal. “How else can we repay these massive loans? Those who object to this deal should then also come forward with an alternative. I suppose you will be satisfied when these naysayers return to power and then tax everything to repay these loans. Would that make you happy?”

Dr. Senaratne and Finance Minister Ravi Karunanayake briefly became unlikely allies at the press conference when the former supported fresh moves to give citizenship to investors bringing in $ 300,000 or more.

“Plenty of Sri Lankans go and get citizenship in other countries but they don’t want foreigners to have citizenship in this country. How is that fair? Giving visas to senior citizens who come as investors has been happening for decades and none of these people became criminals. How is it acceptable when our people get the chance to be dual citizens but others can’t?”