You are here: Home / Business Now / COVID-19 hit economy could be re-built: President 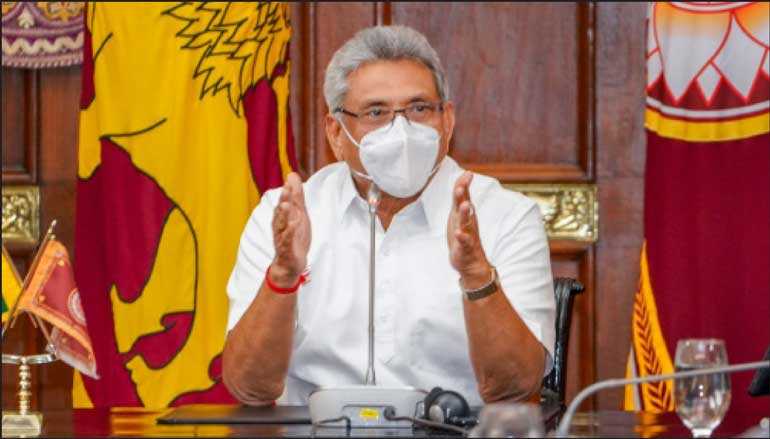 President Gotabaya Rajapaksa has expressed optimism that the economy adversely impacted by the novel coronavirus (COVID-19) pandemic could be re-built on a solid basis.

This optimism he shared when he chaired a meeting of the Presidential Task Force in charge of the Economic Revival and Poverty Eradication on Wednesday.

The Task Force has been entrusted with the responsibility of formulating a new economic model to achieve this objective.

A statement from President’s Media said Rajapaksa directed that the Task Force should prepare economic plans with specified targets in different areas that come under its purview and implement them. The International Monetary Fund has forecast a 3% contraction of Sri Lanka’s economy in 2020 whilst the Central Bank believes there will be a 1.5% or more growth as against 2.3% achieved in 2019. The Task Force also discussed modalities relating to the resumption of civilian life and work from Monday, 11 May.

President Rajapaksa said the apparel and tourism sectors, biggest foreign exchange earners and employers, must be revitalised to ensure they continue to contribute to the economy.

The President was of the view that new opportunities are now open to attract tourists from countries where COVID-19 has subdued. Medical tourism can be promoted by highlighting the capabilities of the indigenous medical system, which was used for the treatment of the virus-infected people. In order to encourage high-spending tourists, visas must be issued to them supplemented by an internationally recognised certificate.

It was pointed out that some tourists prefer to stay longer than usual in a particular country, especially during the winter season. President Rajapaksa highlighted the possibility of strengthening the tourism sector by attracting such long-term travellers.

Members of the Task Force were told to pay attention to promote domestic tourism, so that the local hotel industry could be saved from collapse.

The President also pointed out the possibility of attracting more foreign companies to invest in the Port City and the Industrial Zone in Hambantota. The Ministry Secretaries were entrusted with the responsibility of identifying opportunities for investments instead of seeking foreign loans.

During the last few weeks, a number of new innovations have been made in the country. Steps should be taken to introduce these products to the global market.

Head of the Task Force Basil Rajapaksa said it has the capability of fulfilling its mandate with a new vision in order to achieve objectives set out by the President. The Task Force will support new businesses and will extend the fullest cooperation to already existing large, medium, and small scale enterprises, he stated.

Although the private sector offices have been advised to resume work at 10.00 am daily from 11 May, industrial and production activities can be adjusted in accordance with their requirements. Basil Rajapaksa warned that no loss of employment should take place both in the State and private sectors while the country is moving forward.

Recalling recent requests by Sri Lankan students studying in other countries to return home, President Rajapaksa remarked that it was an indication of the large number of students going overseas to pursue higher education. This has caused an immense outflow of foreign exchange income. President Rajapaksa said that measures should be taken to expand investment opportunities in the field of tertiary education in the country, so that outgoing foreign exchange could be saved while providing educational facilities to foreign students in Sri Lanka.

A large amount of money is being spent to import medicines annually, while most of these medicines can be manufactured locally. The Task Force was requested to prepare necessary background to develop pharmaceutical production in the country.

The production of vegetable and other seeds required by farmers domestically was also discussed.