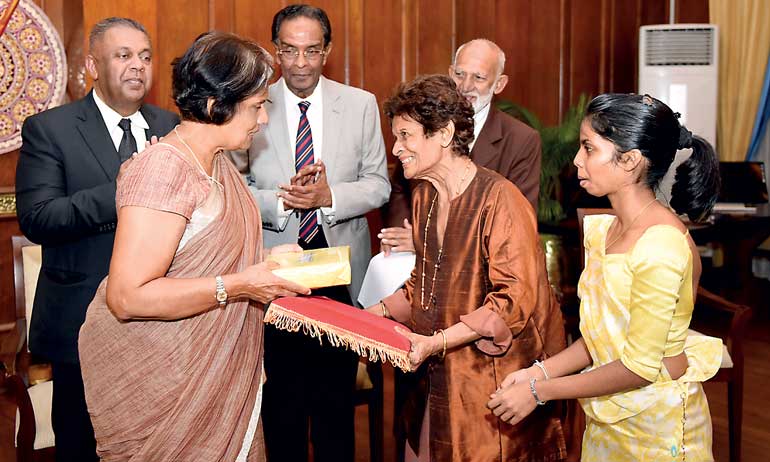 A special task force set up by the Government to solicit public views on reconciliation and justice have recommended a hybrid court comprising local and foreign judges to prosecute war crimes, and urged the Government to appoint a special prosecutor to commence investigations into the controversial cases without delay.

An islandwide consultation process on proposed Government mechanisms to bring about reconciliation and justice conducted over the course of a year ended on Tuesday, with the task force appointed for the purpose handing over its final report.

The handing over ceremony was to be attended by President Maithripala Sirisena and Prime Minister Ranil Wickremesinghe, but both sent their regrets, sparking a civil society outcry. Their absenteeism also raised questions about the Government’s commitment to the public consultations process, and whether the public views represented in the final report would have any impact on the final design of truth and justice mechanisms Sri Lanka has promised to establish to deal with the lingering legacy of a 26-year civil conflict.

In its recommendations, CTF urges the Government to ensure that there will be a majority of national judges and at least one international judge on every bench hearing cases on accountability and grave crimes committed during the war. The task force recommends that the selection criteria for national and international judges on the court to be set out by the constitutional council in consultation with professional and civil society organisations and the Office of the High Commissioner for Human Rights (OHCHR).

“The office of the Special Counsel should be established without delay,” the CTF recommends, with regard to the office of the special prosecutor the Government has promised to set up, to investigate allegations of war crimes and build cases on these crimes.

The report is said to provide a detailed understanding of the consultations that have taken place across the country over the past year. Tri Forces Commanders, mid-level military officials, religious leaders, former LTTE combatants, former military personnel, Ranaviru families and even hardline groups like Sinhala Ravaya came before the Task Force to express their views on the proposed truth and justice structures. Contrary to conventional wisdom that truth and justice was only important to war-affected people in the North and East, CTF representatives said that over 200 people came before the panels in Galle, Matara and Hambantota.

Mirak Raheem, who served as a member of the CTF, told Daily FT that the real test would be whether these public views will impact the final design of the mechanisms the Government was trying to set up to deal with truth and justice issues lingering since the end of the war, or if the State was merely “going through the motions” to temporarily please the international community.

Like the Public Representations Committee (PRC) which sought public views on the contents of a proposed new constitution, the Consultations Task Force findings are also historic, in that it is the first time the State consulted people on what they wanted to do, says Raheem.

He noted that the views expressed by people who came before the Task Force from all parts of the country, really challenged prevailing views on what victims want, as presented by nationalists on all sides, and even human rights activists.

“For instance, people in the North were asking for a hybrid court, rather than one run entirely by internationals – which run contrary to the positions of the hardliners in the North. And meanwhile, families of those missing in action in the South want the support and expertise of international forensic experts to seek answers about their missing loved ones, even while hardliners in the south insist the south is against any level of international involvement,” Raheem explains.

In a press release issued yesterday, the Secretariat for Coordinating Reconciliation Mechanisms said the findings of the report will be taken into consideration in the design of the truth-seeking and justice institutions the Government was proposing.

But Cabinet Spokesman Rajitha Senaratne dismissed the CTF’s recommendation for foreign judges only hours after the report was officially released.

“Not a single foreign judge will sit on this court,” Senaratne claimed, adding that international jurists could however be called on to offer expertise and technical assistance.

The Cabinet Spokesman said that while various institutions and committees could make recommendations, the Government’s position remained the same – it would not allow foreign judges to sit on a future war crimes court.

Senaratne claimed that the UN had also accepted the Government’s position that only national judges will sit on the court.

“When Al Hussein (UN High Commissioner for Human Rights Zeid Ra’ad Al Hussein) was here, he has agreed to this position,” the Minister claimed, even though there has been no such acknowledgement made by the High Commissioner or his Office following his visit to Sri Lanka last year.