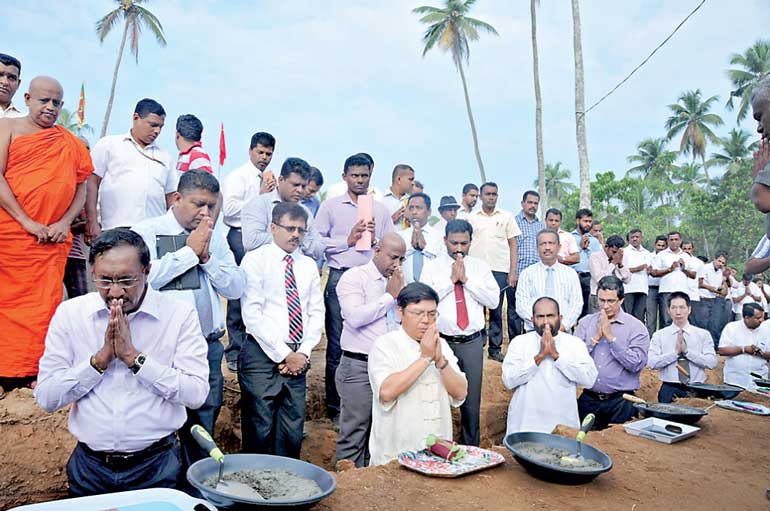 Xinhua: China has begun construction of the ‘Aranayake China-Sri Lanka Friendship village’, in Kegalle, to provide houses for hundreds of victims affected by a massive landslide last year.

Speaking at the ceremony, Minister Yapa said that the construction of ‘Aranayake China-Sri Lanka Friendship Village’ was the largest international aid received by Sri Lanka since the deadly floods and landslides hit the island country in May last year.

Minister Siyambalapitiya said that China was one of the countries that helped Sri Lanka immediately after the floods and landslides last year and had always been a true friend of Sri Lanka who continued to help the country’s economic and social development. “The Friendship Village will provide houses to a large number of people affected by the landslide. They are deeply grateful to China,” Minister Siyambalapitiya said.

Ambassador Yi Xianliang said that prior to the Aranayake China-Sri Lanka Friendship Village, China had already constructed a ‘Faxian China-Sri Lanka friendship Village’ in the south in early 1980s and a ‘Friendship Village’ in the southern Tsunami affected area in 2004. Yi reiterated the condolence and sympathy of the Chinese Government and its people to the Sri Lankan people for the loss of lives and people affected by the floods and landslides in May last year. He said a batch of relief supplies valued at 15 million yuan (Rs. 33 billion), including 100 tents and 3,000 folding beds, was shipped immediately to Sri Lanka following the disaster, and China donated 1.5 million dollar (Rs. 22.5 billion) to initiate this housing project offering the people affected by the disaster better living conditions. In the future China will spare no efforts to help Sri Lanka achieve social and economic development.

Geethalee, a local resident of Aranayake who attended the ceremony, told Xinhua that the Aranayake China-Sri Lanka Friendship Village eased the sorrows of the people who lost their families and houses in the landslide. “We will never forget the help and friendship that China has given us,” she said.