Taking a hard stance against the Government’s conduct over the last two years, one of the main architects of the Yahapalana Government, MP Athuraliye Rathana Thero yesterday announced his decision to function as an independent member in Parliament. 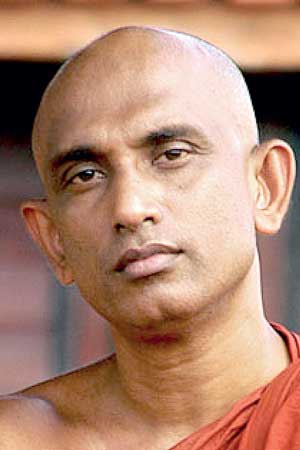 Rathana Thero claimed that he would not join the Opposition despite leaving the Government. He failed to say whether he was giving up his Hela Urumaya party membership as well.

Rathana Thero, a key figure in Maithripala Sirisena’s campaign to contest the 2014 presidential election as a common candidate, claimed that he was not happy with the progress the Government had made during its two years in power. Speaking to the media, Rathana Thero was critical of the Government’s recent conduct and expressed his disappointment over the Government’s attempt to change parts of the Constitution which required a referendum, stating that President Sirisena did not have a mandate to do so.

Rathana Thero said that the President in his election manifesto had promised that no constitutional changes requiring a referendum would be adopted.

“The draft Constitution brings recommendations that affect the unitary nature of the country. We are against this. President Maithripala Sirisena has no power to bring in changes that require a referendum,” he said.

The Thero warned that such a move would bring about political instability in the country and create cracks in reconciliation efforts.

The Government’s failure to establish procurement and audit commissions as promised during the election campaign and outlined in the 19th Amendment was also criticised by the Thero, who also highlighted the need for comprehensive electoral reforms.

The disgruntled Thero also claimed that the Government had failed to do enough to encourage reconciliation between the country’s communities and development in the north, with him paying particular attention to the controversial housing project proposed by the Resentment Ministry. He suggested malpractice and corruption in the project’s execution.

“We did not expect the executive presidency to be abolished. We wanted certain elements of the position to be taken out and that was what was done,” he said, highlighting that this was clearly indicated in his election manifesto.

Rathana Thero also revealed that he had no plans to work against the current government but only intended to work as an independent MP to ensure that he was able to offer it constructive criticism to get it back on track.