You are here: Home / Business Now / A risk worth taking, says Mangala

A new constitution would be Sri Lanka’s most “potent weapon” against preventing a return to violent conflict, Minister Mangala Samaraweera told the Foreign Correspondents Association on Tuesday night.

As fears abound about a deadlock in ongoing constitutional negotiations, Foreign Minister Mangala Samaraweera yesterday struck an optimistic note, expressing confidence that the Government could contest and win support for a new constitution in a referendum. 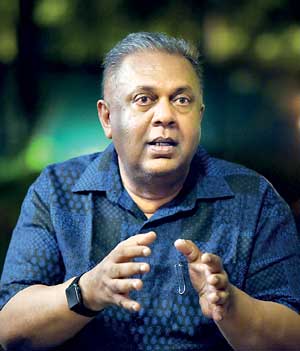 “A referendum is a risk – but I think it’s a risk worth taking,” Minister Samaraweera told the Foreign Correspondents’ Association on Tuesday night.

He admitted that some sections of the National Unity Government had serious concerns about putting the constitutional proposals to an electoral test, especially after the results of Brexit and the referendums in Italy and Columbia.

But the Foreign Minister, who says he has been accused of being “wildly optimistic” about Sri Lanka’s reconciliation process, expressed confidence that the Government could win the support of the SLFP and the JVP.

“We are very confident of getting the two-thirds majority in Parliament needed to pass the constitution. And with the right campaign, I believe the referendum can also be won,” the Minister told Colombo-based foreign correspondents at his official residence in Stanmore Crescent.

Two years into Government, sections of the disparate January 2015 coalition were scattered, with some of them nursing minor grievances at the moment, he explained.

Minister Samaraweera told foreign correspondents that he would be going to Geneva at the end of February to attend the UN Human Rights Council session and commit to going ahead with the implementation of the UNHRC resolution calling for reconciliation and justice in Sri Lanka as planned. “Obviously we need more time, but not forever,” the Minister said he would explain to the Council. The Government delegation would inform the international community that it would concentrate on the constitution-making process first, he explained.

The Foreign Minister said Sri Lanka had a “brilliant window of opportunity” to enact a new constitution that seeks to address the root causes of an ethnic conflict that had spanned six decades. The UNP and the SLFP – arch political enemies were governing together. “And we have a moderate Tamil opposition on the other side. We may not have a moment like this again in our lifetime,” Minister Samaraweera asserted.

Over the past year, a constitutional assembly set up by a resolution of Parliament, has been in the process of drafting a new constitution, that seeks to abolish the executive presidency, reform the country’s electoral system and devolve power meaningfully to the provinces, in a bid to end the island’s long-standing ethnic struggle.

Six subcommittees have already presented reports on key areas of the new constitution including fundamental rights and judicial reform. But the process remains deadlocked as legislators in the main Steering Committee headed by the Prime Minister try to get consensus on fundamental issues relating to devolution, electoral reform and abolition of the presidency before an interim report with a framework of the new constitutional draft is presented to Parliament. The process to draft a new constitution has also been thrust into uncertainty after the SLFP announced that it would not support the abolition of the presidency or constitutional proposals that would require a referendum.

Sri Lanka will request more time at the UN Human Rights Council Session that convenes later this month, to implement the October 2015 resolution calling on the Government to establish mechanisms to deal with post-war reconciliation and justice for major rights abuses during the war.

Foreign Minister Mangala Samaraweera said he would travel to Geneva on 27 February to address the UNHRC, to tell the Council that the Government needed more time to make good on its transitional justice commitments as outlined in the resolution it co-sponsored in 2015.

“Obviously we need more time,” the Foreign Minister told Foreign Correspondents in Colombo on Tuesday night, adding that the extended timeline would not be “forever”.

Minister Samaraweera pledged that there would not be a U-turn on the Government’s reconciliation and justice commitments but sticking to the same metaphor he admitted that there could be “detours” from time to time.

“But the destination remains the same,” he asserted during the meeting.

The Foreign Minister admitted that progress on reconciliation and accountability had not proceeded as fast as it should have.

“Some Sinhalese nationalists think we are moving too fast, some Tamil nationalists believe we are moving too slow, but we are trying to adopt the policy of festina lente – to make haste slowly,” Minister Samaraweera said, adopting a favourite Latin phrase he has used previously when addressing the UNHRC in Geneva.

The Minister, who has consistently championed human rights and reconciliation issues despite waning support for the moves within his own Government, vowed that Sri Lanka’s post-conflict truth-seeking and justice efforts were not motivated by international pressure but by a duty towards its own citizens.

Responding to questions about whether the Government would proceed with transitional justice efforts even when positions on human rights and international intervention may have shifted in the US and Britain – countries that were the main architects of resolutions on Sri Lanka at the UNHRC, Samaraweera responded: “Even if they don’t insist, we insist.”

“While what we have left to do is daunting, what we have already achieved is remarkable, against all odds,” he said.

A progress report on the UNHRC resolution adopted by consensus in October 2015 is due at the Council’s March 2017 session. A report by the High Commissioner of Human Rights, who has been tasked by the Council to support, monitor and assist reconciliation efforts in Sri Lanka, is also due this month. (DB)