You are here: Home / Breaking News / Withering of expectations and prospects of new ones 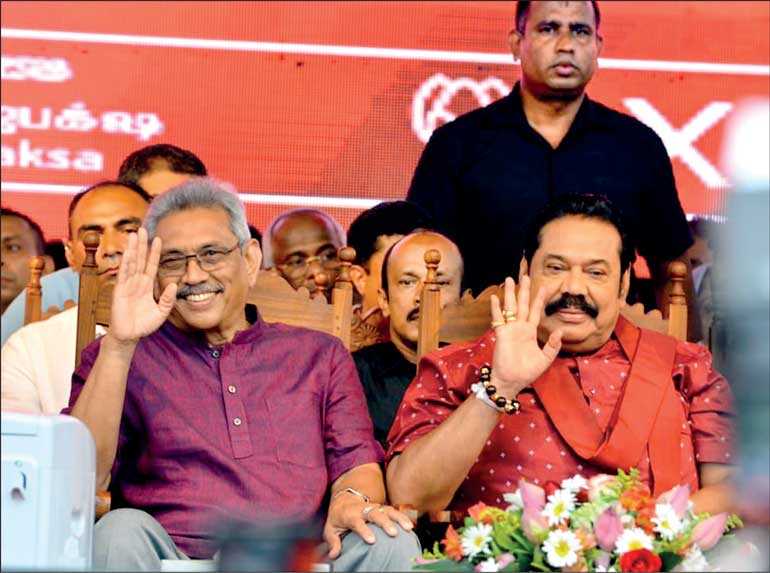 The election of Gotabaya Rajapaksa as President at the last Presidential Election can be said to have been the ultimate wish of the majority of Sinhala Buddhist people. Yet, the people were not aware that the President they were electing does not have executive powers.

Not only the general public, but even the presidential candidates themselves did not have a clear idea about it. Most of them seemed to have expected that the election of Gotabaya Rajapaksa as the President would end all the wrongs of the country and make Sri Lanka a beautiful Sinhala Buddhist nation.

It was the enormity of this expectation of majority Sinhala Buddhist people that enabled him secure an easy victory of the last Presidential Election even in an atmosphere in which the Tamil and Muslim communities had voted en-bloc for Sajith Premadasa, the rival candidate of the UNP.

Three months have elapsed since the new President has been elected. Yet, so far he has not been able to take any major step forward to change the ugly image that has engulfed Sri Lanka, except for displaying the simplicity of his character.

By the time the new President was elected, everything in the country was in a squalid state of degeneration and confusion. The social system was in absolute chaos. The Constitution as well as the institutional system of the country were in a state of corruption and complete disarray.

The agriculture, industry and service sectors of the country’s economy were in a near state of collapse. The issue of foreign debt service had reached a level too severe to be resolved. At that time, Sri Lanka was in a position where even a skilled and experienced person would find it almost impossible to rule the country with simple solutions, except by a big surgery.

The President might have had adequate skills to govern the country provided it was in good condition. Unfortunately, he has inherited a country which is sick and cannot be governed so easily. It is in a sordid condition, recovery of which would not be possible without performing a major surgery on almost every aspect of it.

Apparently the President did not have a clear vision of the need for a major surgery as such. It was not a general limitation inherent only to the President himself. This limitation of vision can be considered a weakness shared by all other candidates who contested the Presidential Election.

Therefore, not only the country but even the President is in a big quandary. Although the President was elected by public vote incurring a great cost, the majority Sinhala Buddhist people who elected him did not know that he has only a nominal power consequent to the enactment of the 19th Amendment.

Even the President may not have had a clear understanding of this limitation initially. Perhaps, now he must have realised that he can’t even retain the Ministry of Defence under his jurisdiction, let alone exercising absolute executive powers, despite being elected by public vote. The people who elected the President by their vote must be having some knowledge about this situation now.

Therefore, the President wants to have a strong Parliament that is loyal to him and repeal the 19th Amendment. But achieving both these objectives can be considered difficult goals as, ironically, the President has to fight for it, not with the Opposition, but with the party that brought him to power.

Younger brother the President, the elder one the PM

Under the circumstances, either the Prime Minister, the elder brother, must yield to the President, his younger brother, or else the situation that might arise can lead to the creation of a Cold War which could be even more ridiculous and destructive than the Cold War that prevailed between President Sirisena and Prime Minister Ranil Wickremesinghe under the Yahapalana regime.

The 19th Amendment can be described as a law enacted in a devious manner, contrary to the Constitution and the guidance issued by the Judiciary. However, it has become a statutory law as no one had challenged the legality of it at the right time. For whatever reason, even the political group now in power appears to have lost the ability to challenge the legality of the 19th Amendment.

In this backdrop, according to the 19th Amendment, the steering power of the State rests on the Prime Minister and not on the President who can be considered the great expectation of the Sinhala Buddhist majority.

Apparently, the President has a greater concern in involving a considerable number of the members of Viyathmaga movement, who serve as an important cog wheel in his political machine, in the next Parliamentary Election. But it does not appear to be a dream that can be realised easily. What is likely to happen is that Gotabaya Rajapaksa will eventually end up remaining a nominal President acting on the advice of the Prime Minister, his elder brother. Accordingly, Prime Minister Mahinda Rajapaksa will once again become the head of State.

What is the solution?

Whether State power should be exercised by President Gotabaya or Prime Minister Mahinda Rajapaksa, or whether Parliament should be represented by the same lot of old corrupt politicians or by new faces of educated people cannot be considered the solution to the crisis Sri Lanka is facing. It is the acute degeneration of the State and the social and political system of the country which has rendered the forward march of the country no longer possible; this can be considered the major issue of the crisis which needs to be solved.

Sending a new group of educated MPs to Parliament, effecting a simple change in the system of governance or introducing simple and haphazard reforms will not be a solution to the crisis. Subjecting the entire system to an overall surgery would be the only way to resolve the crisis.

The proposed surgery or operation cannot be performed by the Legislature or traditional political regime for the deteriorated condition of the system is a direct outcome of the corrupt and irresponsible behaviour of all of them. The misuse of public property by presidents, as well as by parliamentarians of successive governments, contrary to the law of the country and as a normal practice when they were under their temporary custody, can be considered the main cause of the crisis.

How could the public be actively involved in a genuine transformation of the system? What is the method to be adopted for that? At this juncture, it is important to consider briefly, as to whether the representatives of the Legislature or the traditional political regime should be involved or not in the process of this transformation.

1. The Constituent Assembly shall have the power to formulate laws, determine matters, formulate and design policies and implement them during the period of transition.

2. It must have the power to investigate, question, and establish an efficient and effective democratic political system which functions under the rule of law and is free of corruption in its role of initiating a reformatory program to replace the old system.

3. It must have the power to question and investigate the breakdown of the social system; formulate, implement and establish the modern nation by abolishing the recognition accorded to caste discrimination, completely and promoting the ethnic and religious harmony

4. It shall have the power to draft and enact an interim or transitional Constitution that shall be in force until a new Constitution is drafted and enacted; the interim Constitution should indicate the role of the Constituent Assembly as to how the functions of the State should be carried out until the basic foundation is laid for the establishment of a new political and a social system.

The role of the people

The recreation of the State, its political, social and economic system should become a matter of concern for the people themselves not only because the constitutional power to effect this change lies with the people themselves, but also because of the need of such a program to transform the civil society of Sri Lanka, which is in a state of numbness caused by non-progressive attitudes and the adverse impact of the crisis the country is facing, into a dynamic society which is active and prone to think in line with modern trends.

This situation can be considered an important factor affecting the backward attitudes, selfish feelings and state of numbness of the citizens of Sri Lanka.

When a program like this is introduced, entrusting the onerous responsibility of rescuing the socio-political and economic system of the country from its present degenerated level to the people, and educating them on how it should be done with proper guidance, certainly the people who are currently in a state of numbness will awaken from their slumber and work towards recreating a better system on their own initiative. The collective effort and public dialogue that they may initiate in this process will help cure the degeneration caused in the public life and create an enlightened society with modern attitudes.

In view of the State, the political and social system and the Constitution of the country being things created by people themselves in their own initiative, this program will result in creating a society having a common feeling and a strong sense of attachment to the country and for things associated with it. In the process, all discriminated and marginalised people will have the opportunity to live as citizens with equal respect and rights. Probably, this can be considered the most important outcome of this process.

This system, known as making of a people’s constitution or a participatory constitution which can be used creatively to change the entire system, is not a new experiment proposed to be made in Sri Lanka. It is rather an accepted system that had been tested by a number of other countries and proved with successful results. Nicaragua (in 1980), Brazil (in 1988), Uganda and South Africa (in 1994), Eritrea (in 1997) and Uganda (in 2002) are among the countries which have used this system.

A program of structural reforms of this nature leading to a profound change in the whole system can take a long period. But, as it involves a program of a profound change in the overall system, Sri Lanka can be said to be embarking on a new and accelerated journey from its initiation, and not moving in a precipitous journey and as such, it will certainly attract the attention of the people of Sri Lanka, as well as those of the international community.

Bringing about a profound change in the whole system

The world powers will undoubtedly extend their wholehearted support for a program like this, the way they did for South Africa without any prejudice or discrimination. The favourable world environment it may create will open new vistas for Sri Lanka to creatively resolve the foreign debt crisis which has become an unbearable burden to the country.