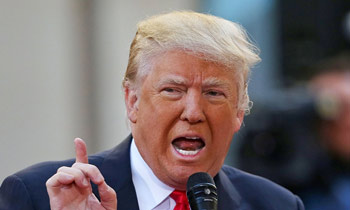 The fate of the refugee resettlement deal struck between Australia and the US last November remains uncertain as President Donald Trump took to Twitter Thursday to publicly denounce the pact as a ‘dumb deal’, the International Business Times reported.

Trump took to Twitter to call the agreement a ‘dumb deal.' The deal in question is regarding the transfer of approximately up to 1,250 refugees from Australia’s offshore detention islands of Manus Island and Nauru, including many from Sri Lanka, Pakistan, Bangladesh, Iran and Iraq for resettlement into the US.

Trump’s comments follow a Washington Post report that detailed a phone call between him and Turnbull on Saturday, which Trump described as the “this was the worst call by far,” compared to his interactions with four other leaders on the same day.

In the phone call that was originally planned for an hour but was then reportedly cut short abruptly after twenty-five minutes, Trump reportedly accused Australia of seeking to export the “next Boston bombers” and referred to the asylum seekers as “illegal immigrants”.

Two hours before Trump’s tweet, in response to the Washington Post story, the US State Department insisted that the current administration remains committed to honour the deal.

“President Trump’s decision to honour the refugee agreement has not changed,” a US embassy spokesperson in Canberra said in a statement, according to the Guardian.

Following the tweet, Prime Minister Malcolm Turnbull, who was asked to comment on the row said that the commitment to the deal was “confirmed several times now by the [U.S.] government.”

“We have a clear commitment from the president…we expect that the commitment will continue.” Turnbull told Melbourne radio station 3AW, as reported by the Guardian.

In the aftermath of the travel ban, a teenager inmate from Iran residing in the detention centre in Nauru attempted suicide by trying to hang himself at the island’s processing centre and was subsequently taken by police and held in jail.

Naruru and Manus Island have been at the centre of human rights abuse accusations by those detained, including rapes, child sexual abuse and dangerous levels of sustained mental illness. The murder of one asylum seeker by guards and inadequate medical treatment leading to several other deaths as claimed by various human rights reports had also made headlines.

Do you believe it? The Obama Administration agreed to take thousands of illegal immigrants from Australia. Why? I will study this dumb deal!