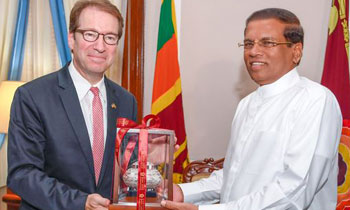 A bi-partisan group of Representatives of the United States Congress visiting Sri Lanka paid a courtesy call on President Maithripala Sirisena today at the Presidential Secretariat.

President Sirisena, expressing his satisfaction over the strength of the bilateral relations between the two countries, said that that the Government of Sri Lanka is totally committed to further strengthen relations, especially in economic and investment spheres.

During the call, leader of the HDP Group Congressman Peter Roskam expressed his admiration on behalf of US House of Representatives for the transformative process that President has led after his election two years ago.
He said that measures taken for reconciliation, development of the country, good governance and citizen’s right are laudable.

He said that USA will stand by Sri Lanka in its challenging journey towards economic development.
The delegation was accompanied by Atul Keshap Ambassador for USA, and Prasad Kariyawasam Sri Lanka Ambassador in USA.